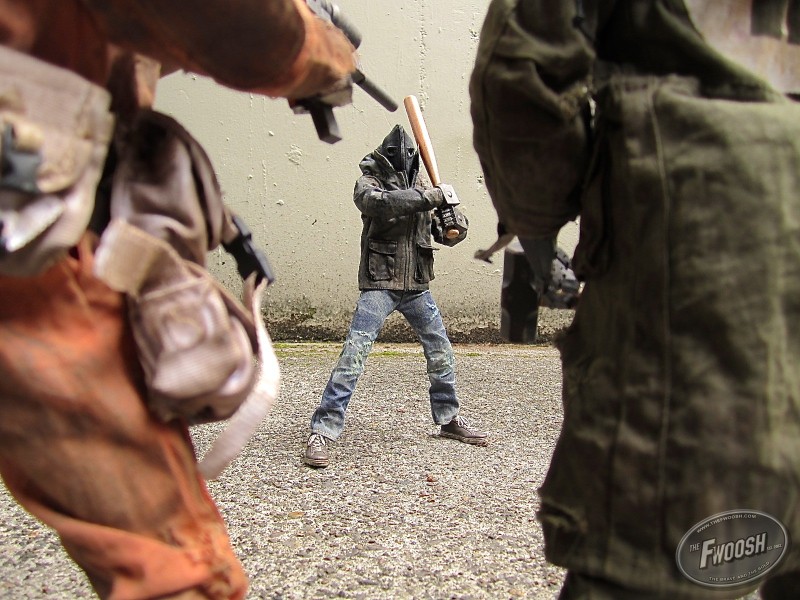 As part of the ThreeA Toys 2012 membership package, each member got a hat, a messenger bag, and 1/6 (12 inch) Adventure Kartel F-Legion 0024491 Figure. Today Canonball and I will be taking a look at the figure. The hat is a hat and the bag is a bag, but the figure is magic. He’s a new, unique addition to the Adventure Kartel line. Keep reading after the jump.

A relic from the NORTHERN SUBURB wars, the only remaining member of F-LEGION.

F-LEGION were experimental cyborgs designed to help the ADF against the hoards of robots pillaging the northern suburbs of New Andria!

0024491 was the only member to return from the mysterious ROBOT ISLAND after an ill-fated assault. 00024491 has never spoken of the mission and to this day still carries on his prime directive to protect the northern suburbs from all the trouble merchants and shit stirrers. 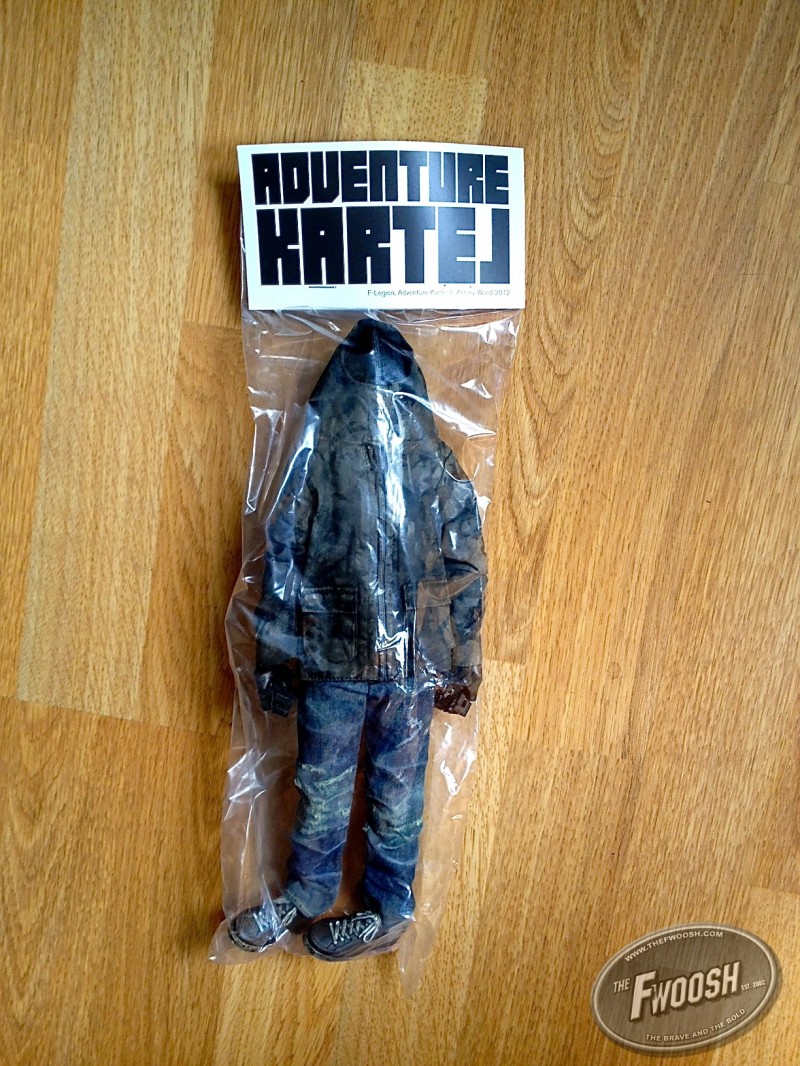 There isn’t much to the packaging. The figure came in a plastic bag stapled shut to a cardboard header. This is the first Adventure Kartal to be released without a box and/or poster, and, to tell the truth, it’s refreshing in a way. It’s always difficult to throw away the boxes ThreeA figures come in because they’re so nicely done, so this saves us from ever having to make that decision.

The figure is another solid piece of engineering from ThreeA. Instead of gloves or the normal, non-articulated hands Adveventure Kartel figures normally come with, this figure sports fully-articulated robotic hands; they are more or less the same hands that the retail JungleVet Ankou or the WWR Dropcloths have. They look good, but I question their ability to hold the bat over time. Yes, 0024491 walks around with a good old Louisville slugger that he uses to beat up trespassers, or Zombs, or members of the 10-Finger Gang. 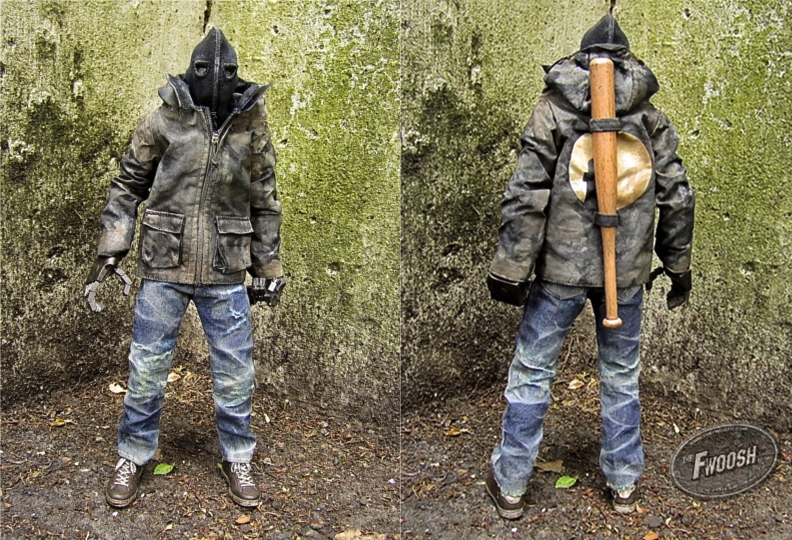 As with all ThreeA toys, the clothes are a hit. The hooded jacket is well done, as are the jeans. I like the bleach-washed look to the jeans, something classic and cool. The shoes are a treat, I can’t tell if they are Stan Smiths or old Nikes, but whatever they are they make the outfit. The jacket has a mask sewn into the hood, but I’m not certain I dig the mask; it seems like an extra that doesn’t make sense. 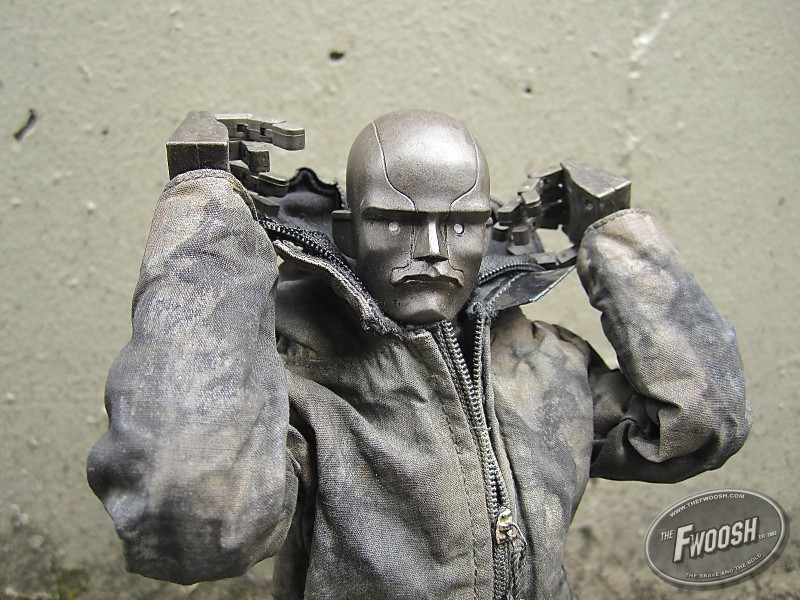 The head sculpt is elegant. It is clearly robotic, and the human features make it something you can relate to. As with all ThreeA heads, there is no real expression, which is where your imagination comes into play. Your imagination begins to fill the blank palette and create the personality of the figure. 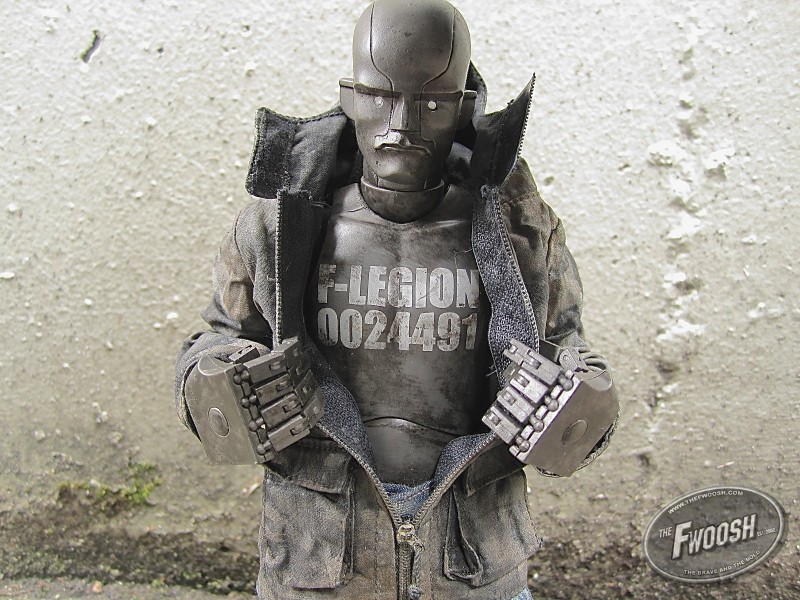 This is a well-done figure and it is fun to pose and play with. I am looking forward to the portable version in the far, far future.

When teaser images of the F-Legion figure first surfaced late last year, I was sold on sight. I loved it. But one would think that after all these years in this game, I would have learned to not expect the finished figure to match the prototype. For the most part, I’m fond of the figure and I echo many of Pabs’ opinions, but there are a few key areas where I think detract from the overall quality of the figure. 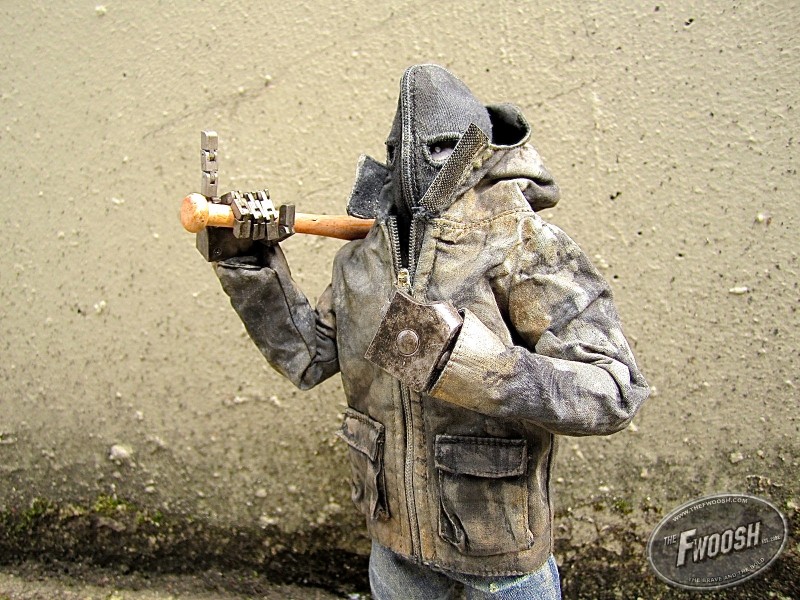 The one are that bothers me most is the coat. They overdid it with the weathering. Or, rather, the weathering isn’t as convincing as it should be–it just looks dirty and muddy as opposed to worn and lived in. This could very well be the intended look, however. It’s also an awkward fit, especially where the hood is concerned. When the hood is up, all that’s really visible is the figure’s forehead. It almost makes him look like a Bambaboss, but it’s very awkward regardless. 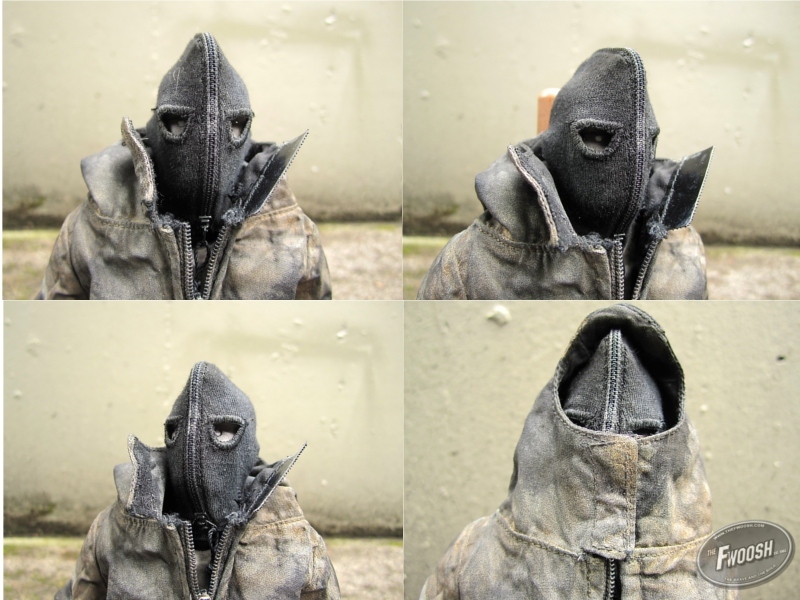 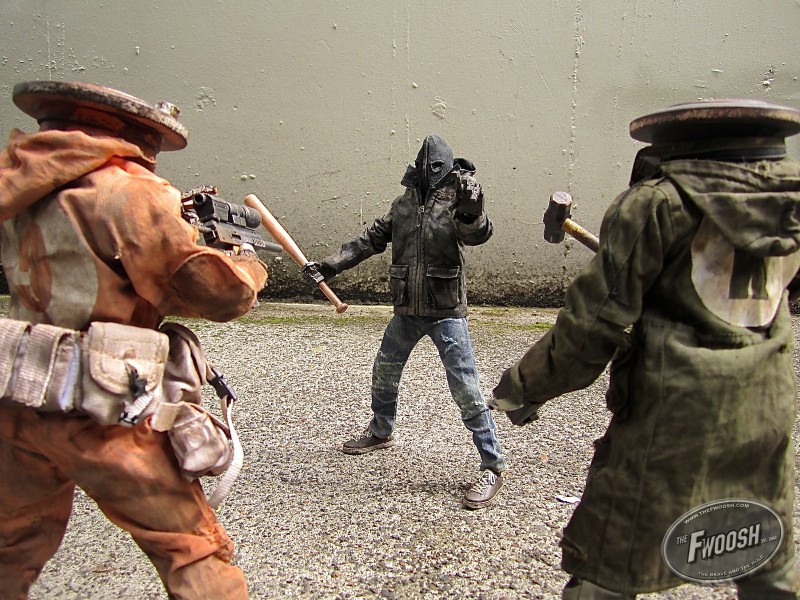 My biggest issue with the coat is the zipper. It isn’t a complete zipper, meaning it’s missing the top stop and the bottom stop, the parts of a zipper that clearly mark the beginning and the end. As a result, if it’s zipped too far in either direction, the pull tab will come right off, and if that happens, good luck getting it back on. It makes me wonder if ThreeA, in an effort to reduce costs, used sections from a much larger zipper in the construction of the coat. I can’t imagine why else the coat would be missing these very important parts. Great caution should be used when using the zipper so it doesn’t zip right off. 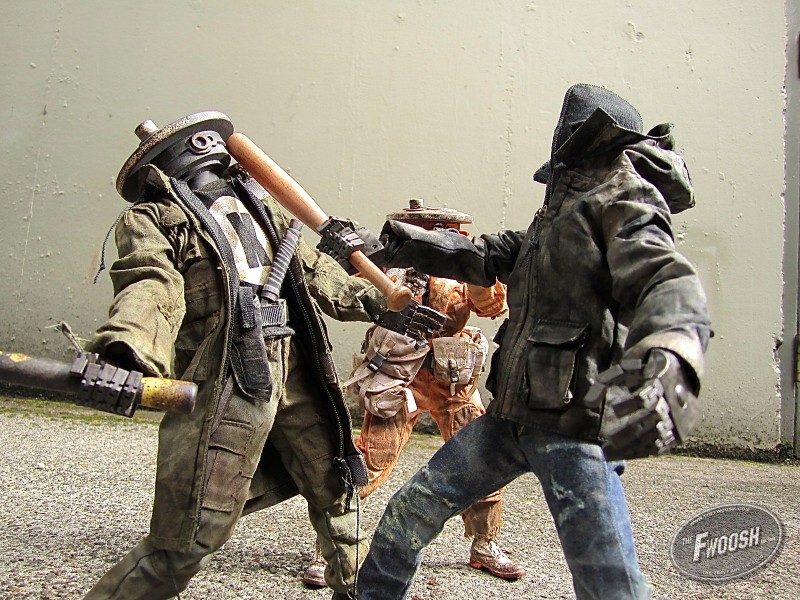 Other than the coat, I like the figure quite a bit, and I agree that the shoes are arguably the best part. He’s fun to play around with and pose with the bat, and he adds an interesting new element to the Adventure Kartel story.

Discuss on the Fwoosh forums.