ThreeA Toys released another picture of the upcoming 1/12 scale–or 6-inch action-figure goodness–Sea Monkey. This is a collaboration with Kenny Wong, a well-known Hong Kong-based designer. ThreeA released an official picture on their blog, not only revealing the scale of the diving suit, but also a new 1/12 female design by Ashley Wood. This bodes well for those of us that have begged for 6-inch Action Portable versions of their Popbot, Adventure Kartel and World War Robot females. 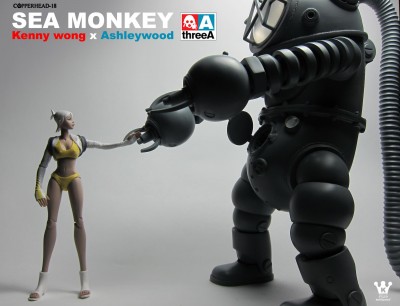 As always discuss this on our forums: