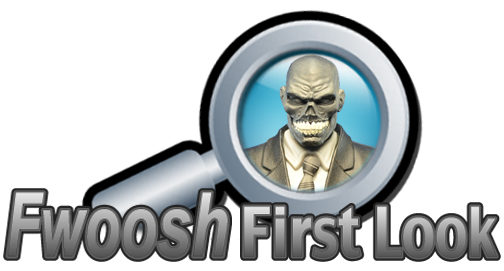 I know that the last two First Looks have been MOTU-centric, but let us not forget that there is another subscription Club hanging in the balance right now, the DC Comics-focused Club Infinite Earths. If you exclusively-MOTU collectors are feeling the anxiety over the fate of that line right now, welcome to year two of our DC struggle. It is a tough time, especially right after all of the elation of Comic Con, but we still have until August 6th to make both of these happen. However, even if we have been in this “hanging in the balance” situation before, the lead-in to the DC Club has been completely different this year than what was presented last summer. Last year, we were asked to buy into a subscription pretty much on faith. There were not a lot of figures to show, and the sudden change in marketing philosophy at DC had recently changed, throwing a monkey wrench into planning. Well, by SDCC of this year, I think most fans agree that Mattel did (for the most part) deliver on character selection for a program designed for the “adult collector.” Sure, there are a couple of bumps here and there (ahem, Rocket Red), but guys like Uncle Sam, Platinum, Jay Garrick, and this feature’s subject, Black Mask, are right up the alley of what has been requested for a program like this. So we should be good, right? 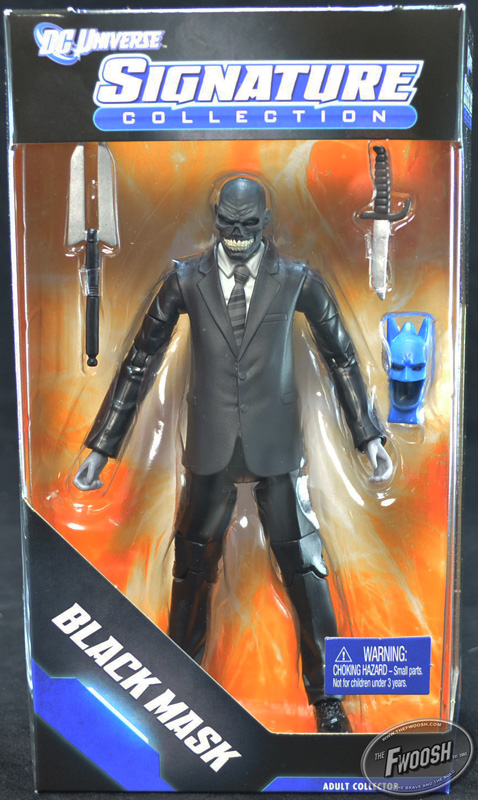 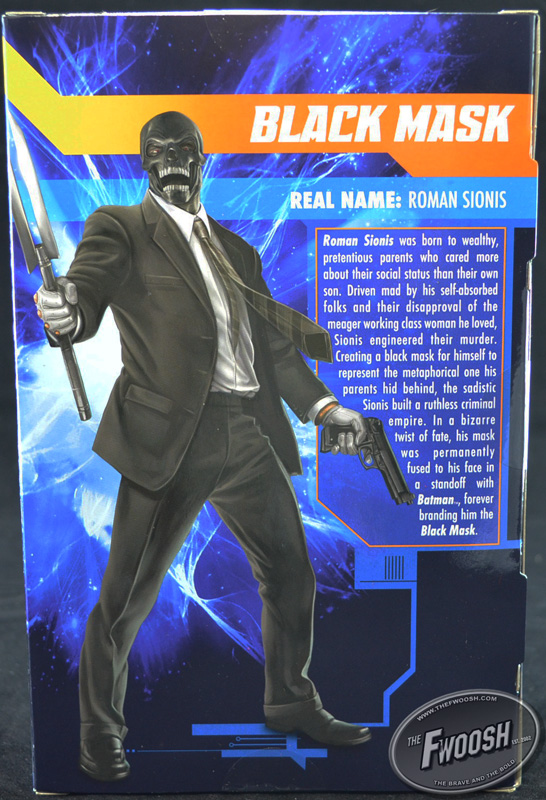 I mean, I personally have been very happy with the character selection that the Club has delivered thus far. Sure, not every character has been my favorite, but I have entire universe to build and when 2012 has afforded me the opportunity to add Metron, Platinum, Tin, Lead, Elasti-Girl, Uncle Sam, Jay Garrick, and Poison Ivy to my ranks, I have very little to nitpick. 2013 looks to be continuing the trend of highly-demanded characters too, and we are getting oft-requested Lantern leaders, the I-can’t-believe-it-has-taken-this-long Wally West Flash, and, my personal favorite, Elongated Man. As far as I am concerned, there is not a weak character in the first five months of 2013 (again, they might not ALL be your favorite, but think of the collection as a whole) and I am much more excited for the possibilities for next year, even over this year. There is a lot to do still with the DC Universe. There are still a lot of JSA, JLI, Freedom Fighters, New Gods, etc. that need to be done. Heck, there are still a lot of Bat-family characters hanging out there to be made. So, if you still want to build the largest DC collection ever, it is time to make the choice. If you are ready, you can subscribe. 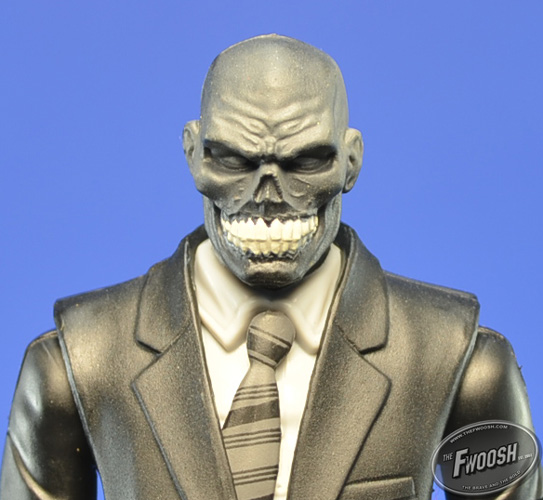 Ah, but we have one less Bat-family figure to demand with the release of September’s Black Mask. I know that when this figure was shown off at Toy Fair in February, he actually took several collectors by surprise. Sure, he is viable and somewhat popular character, but I think that most people expected a character like Ra’s al Ghul to perhaps show up before Black Mask. But that is one of the great things about a collector-centric subscription program–lots of characters are fair game and we can still be surprised by the offerings of our program as the year goes on. 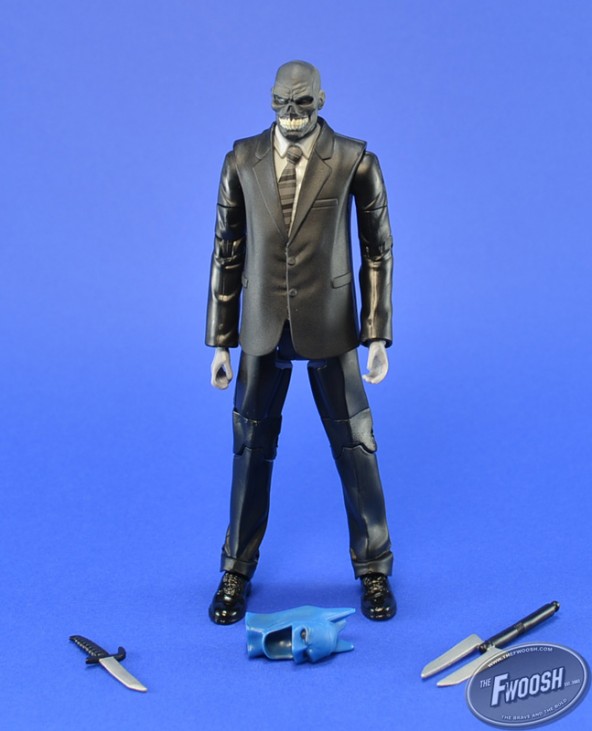 I happen to like ol’ Roman as a character, too. Sure, he is a brutal mob boss, but his ferocity, sadism, and overall gumption make him a frightening character in the hands of the right writer. Oh, and he has his titular “black mask” that could make the most hardened member of Gotham’s finest dowse his drawers in a one-on-one showdown. His scary visage has been carried over into the figure as well, and as you can see, this is a distinctly modern take on the character. 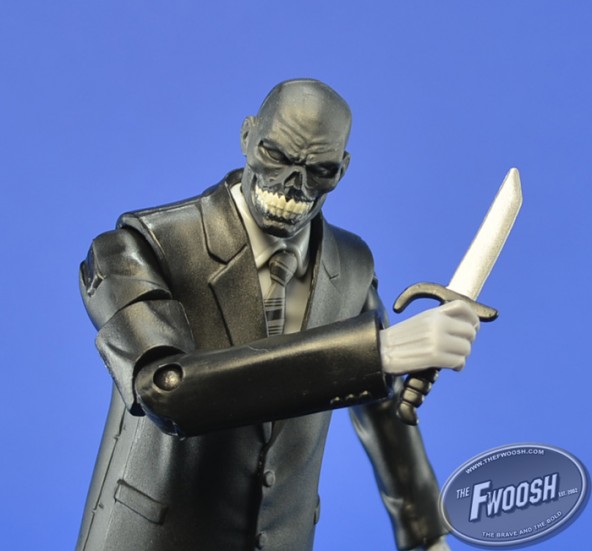 What you get in terms of the figure itself is the standard DCUC suit body (I happen to like this base) with a new necktie and head. The figure is pretty monochromatic (there is a lot of that going around this month in these First Looks), but I think the black and gray color cues used are completely appropriate to the character and they establish a theme of a very dark and scary motif that Black Mask would want to convey. The slightly disheveled tie is an interesting choice and it gives the figure that “I dress nicely, but I will still brutally murder you” vibe. He also has his whitish-gray gloves so he doesn’t have to get his hands dirty, even when he is getting his hands dirty. The one thing I would harp on with this figure is that, like others that have used this body in the past, the up and down neck movement is pretty restricted so the head does not move along the y-axis very much. 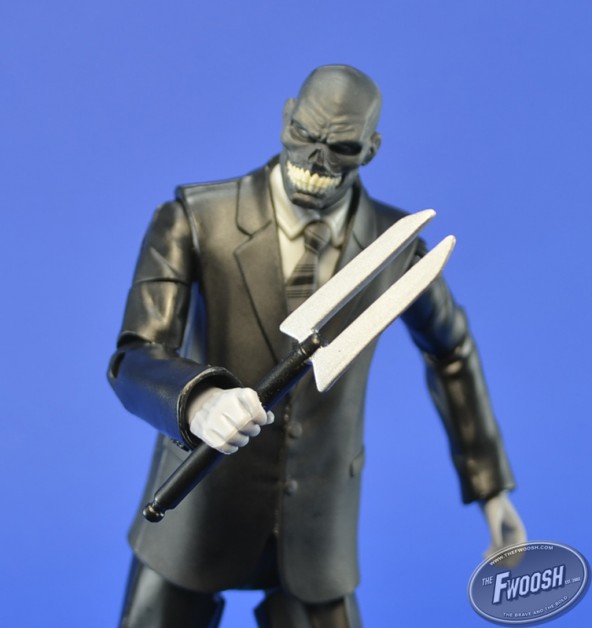 The head sculpt is the major draw to this figure, and I think that the Four Horsemen really captured his character well. Black Mask has recently been portrayed in the comics with his eyes showing through the mask, as well as being hidden by it. I personally think that he looks a lot scarier with his eyes hidden and that is how he has been captured in this figure. The lifeless ocular cavities just scream “Bat Rogue” and when you dress in all black, you don’t want your pupils giving you away in the dark of a Gotham City alley. For being mostly black (with some “teeth”) there is a lot of detail in the sculpt that you can hopefully see in the pictures. 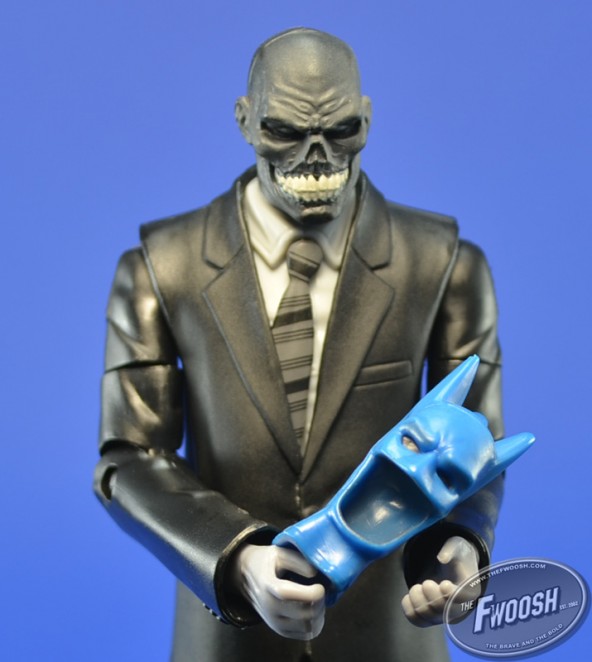 Black Mask is also known for using many weapons and implements of destruction in his criminal activities. Guns, knives, bats, and heck, even drills have all been a part of his repertoire at one point or another. This figure features his penchant for blades and he has two knives to fight off the Batman. The first is a double-bladed dealy that I am sure has a proper name, but not being a weapons expert, I am not sure what it is. I think this is my least favorite of the two knives just because it seems more refined, and I like the idea of Mask picking up a knife easily at hand and cutting you up bad. It is a good accessory, but I think I will go with the second knife. 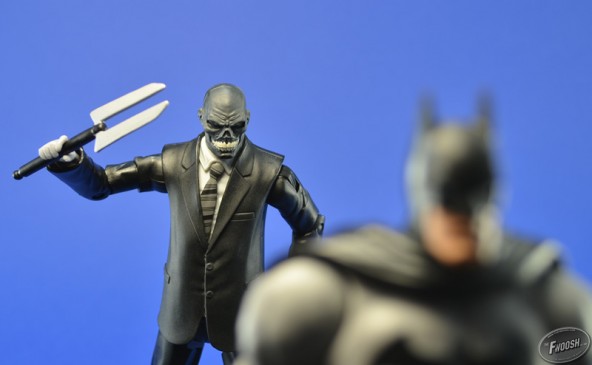 The other knife is taken right from the cover of Batman 636, the “King of Gotham City” issue. Not only that, but you also get the Batman cowl he stabs into the wall using the aforementioned knife. This blade seems much more Mask’s speed, and this will be the one I will have displayed in my collection. I think it is a great nod to the fans to include the stabbed-up cowl as well, but for some reason it is blue instead of black like the cover. I am not sure why this choice was made, but maybe the design team thought there was enough black going on with the figure already. 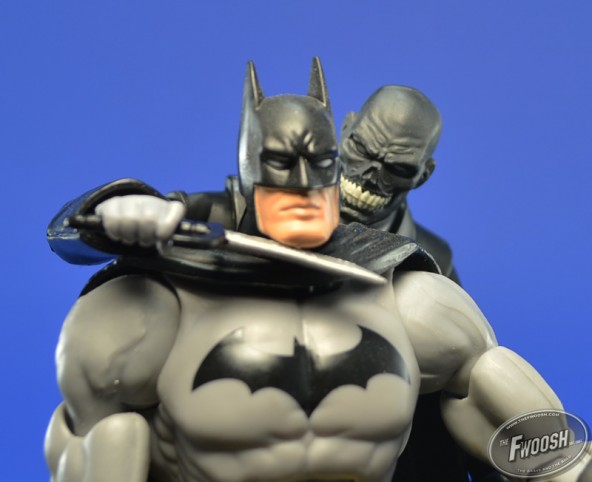 Bat Fans, you are in for a good stretch starting in September. I think a lot of collectors that have been lukewarm about this figure will like him more once he is hanging out with the rest of the Bat Rogues. He is well done and represents the kind of characters that are possible in this club program. He looks great with a knife, but if you prefer a gun, I am sure you have a few extras lying around in one of your many accessory bins. He is also the prelude to Poison Ivy coming in October, so Batman’s workload is going to get a lot heavier in the next few months. I think that the possibility for more of the Bat Family coming in the Club is 2013 is very strong, so if you want to build up your ranks, head on over and subscribe. You will get an exclusive Monsieur Mallah figure (with the Brain!) as a subscription-only bonus for your signing up. 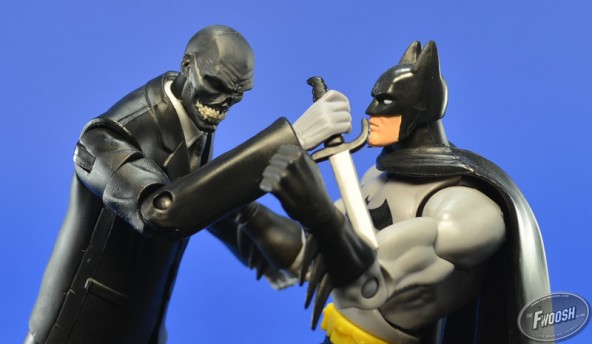 *Thanks to the Toy Guru and the DC team for sending along this scourge of Gotham City. I am sure he and the Joker are fighting each other right now while I am not at home for control of the Bat Rogue portion of my display shelf!