You know, there are many things that I like about the online collector-targeted-monthly-figure-release plan. When it comes to properties that I really like, I am generally an all-in (there are some exceptions) kind of guy. For instance, I want ALL of the characters in the MOTU universe, and the same  goes for the DC Universe. Those are pretty expansive lines, though, so when I get a new character added on a regular basis, I can feel my collections filling out. However, being that I am a pretty big fan of classic Voltron, one would think that having a subscription plan to complete a giant version of the Defender of the Universe complete with pilots would be an awesome (and easy) way to build up a robot. For the most part, that would be correct. HOWEVER, since my wants for Voltron are much more finite, it almost becomes harder to wait out the year to finally be able to assemble the final Voltron figure. I know, that is wanting to have it both ways, but now that the Green Lion and Pidge are releasing tomorrow, the wait for the final release (the Black Lion) is starting to become a bit torturous. Yes, it is fun to be collecting along the way, but my normally welcomed sense of high anticipation has got me doing a childish impatient tantrum dance. 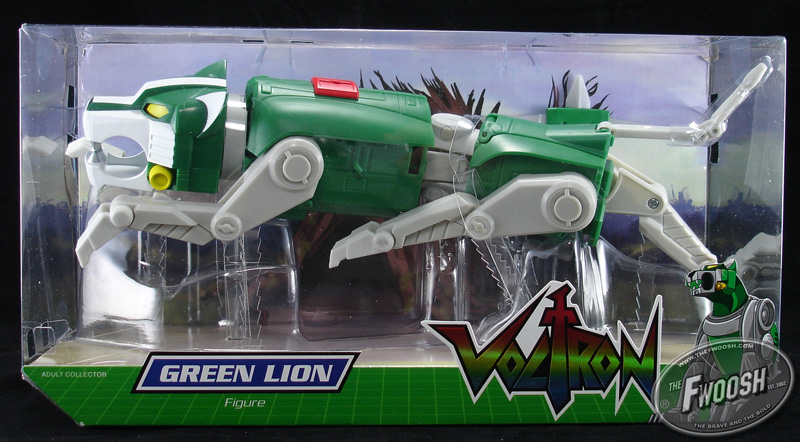 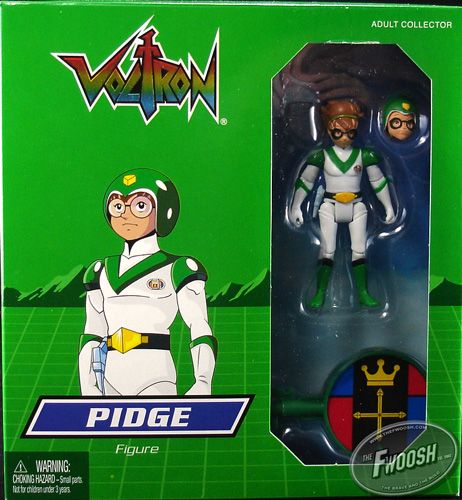 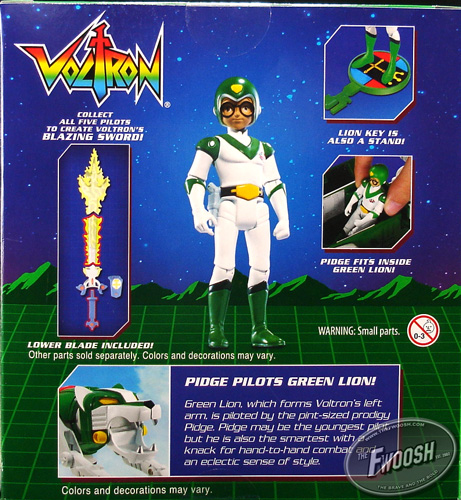 That is probably because the end is actually starting to come in sight. Sure, when we have had Lance and Hunk and their respective lions, we knew we were getting started, but with the arrival of the pint-sized Pidge, we are now over halfway there and the big payoff is becoming more and more apparent. I realize that this Voltron line is not for everyone, but for someone who never had any further exposure to the property outside of the cartoon, these lions are looking pretty much how I remember them. So, it is understandable that I was actually surprised that this was the direction and the style the Mattel team was going to cater to when I saw the fully-built bot at SDCC last year. For awhile I thought I would be content in just having the smaller exclusive Voltron figure, but seeing the behemoth in person was enough to lure me into a buy-in for this collection. That being said, I am ready to have them all so I can finally build my own Voltron head to toe, so October (I am guessing) seems so far off at this point. 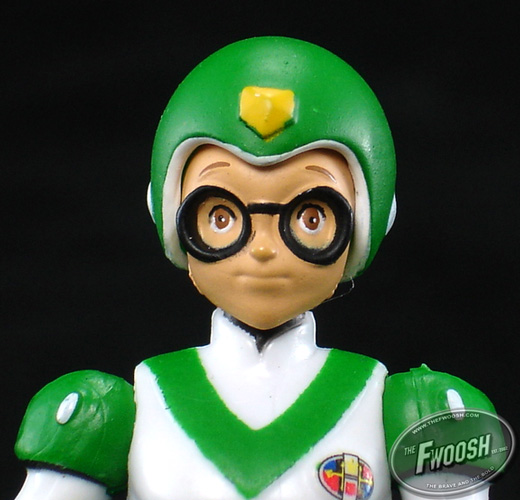 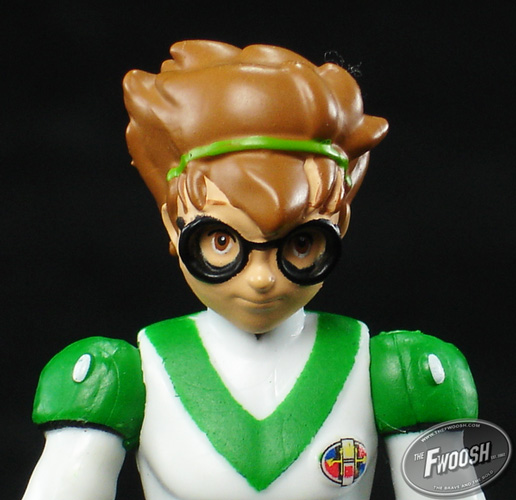 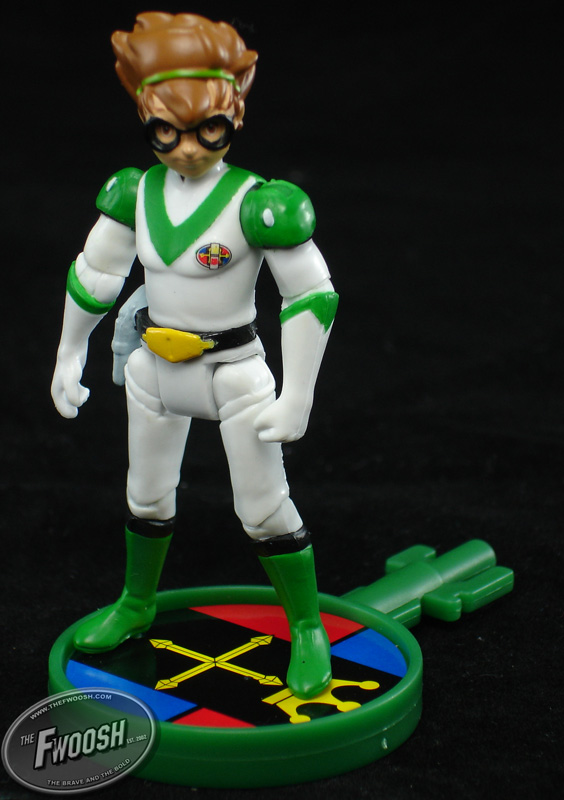 Sorry, let’s not let my impatient anticipation detract from the actual subjects at hand. Yes, I want my completed Voltron more than ever at this point, but I am still getting each pilot for the first time (for me) so the collection of this diverse group is a good way to spend the time until this fall. The shapes and sizes of the pilots are as diverse as their personalities and we are going from the biggest pilot to the smallest in the release succession. I think if you grew up watching reruns of the (relatively) shortly-run original cartoon, you have a bit of sentimentality attached to Pidge. None of the pilots were particularly old, but Pidge was the kid of the crew. He was also the brains. I was not the kind of kid that needed kid characters in stories to get me to like them. In fact, I was never a big Teen Titans or Legion of Super Heroes fan because they were younger. Strange, I know, but Pidge was a kid and he got to pilot a huge frikkin’ flying robot lion. Now THAT is the way you get me to like a kid character. 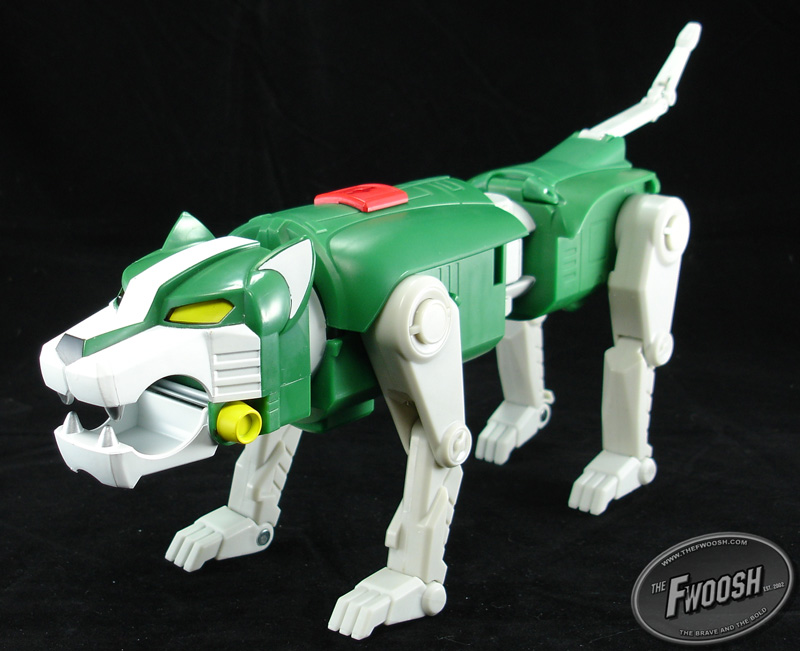 Like I said, Pidge is an all new sculpt to help realize his small stature, but if you are familiar with joint design and construction of Lance and Hunk, you pretty much know what you are getting with Pidge. I was actually kind of surprised he retained all of the points of articulation he did due to his shorter limbs, but he is surprisingly posable and there is not really any relevant pose that the larger figures can accomplish that Pidge cannot. He also includes an alternate helmeted head for full-on pilot mode. I am REALLY annoyed right now because I have misplaced my helmeted Lance head so it looks like I will be building my Voltron and then I will have the pilots stand in front of him, but I was not sure which look I would give them. Well, unless I can find the Lance head, my choice has been made for me. Anyway, Pidge has his normal crazy anime hairdo and his trademark glasses. The rims on the glasses are thicker than they were portrayed in the show, but this is nothing out of the ordinary when rims are translated to little plastic men. He also includes his key and Voltron connect-a-sword piece. 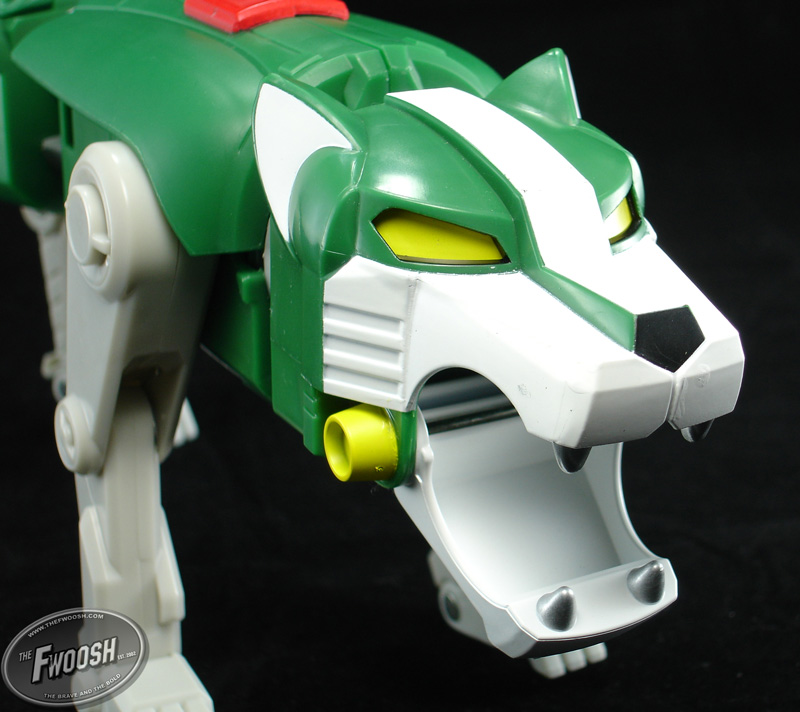 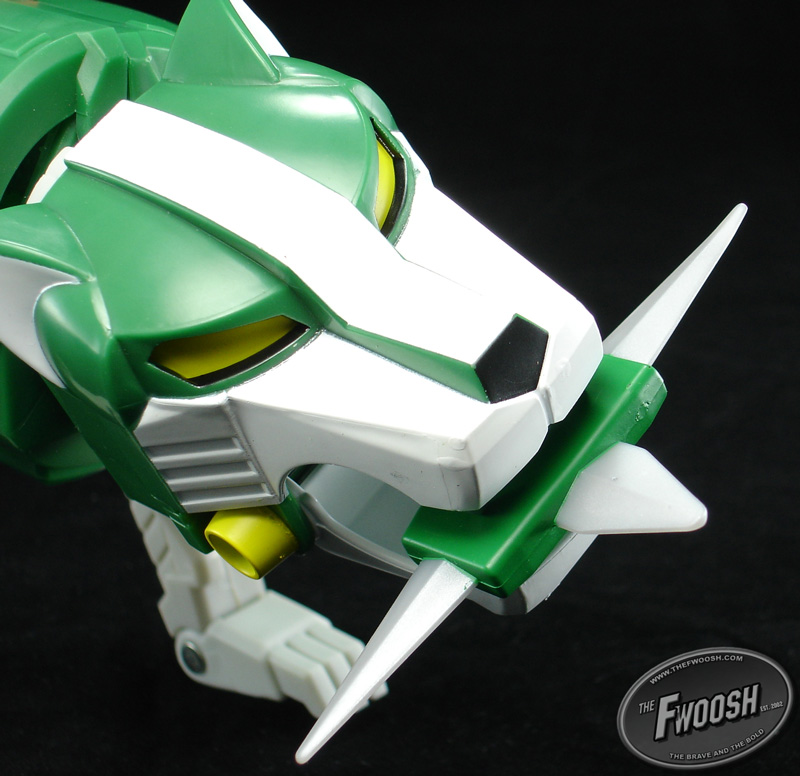 For the Green Lion itself, you know that the “arm” lions are the smallest in the fleet, so from a size perspective, this one is more on par with the Red Lion, rather than the Yellow. All of the joint construction and spring loaded folding mechanisms of the previous releases are present here. When the joints click into place on the Green Lion, they seem like they hold stronger than the other two, but I am pretty positive this will vary on a case by case basis. The arms and legs, like the other lions, are cast in the solid off-white plastic, and I have to say these are the spots that I wish had a few paint apps to bring out the details. All of the points of articulation are the same as the Red Lion and the cockpit opens with the key (or without). None of the pilots have been able to be secured in their sets past closing the cockpit, but even though Pidge is smaller, he does not rattle around any more than the others. 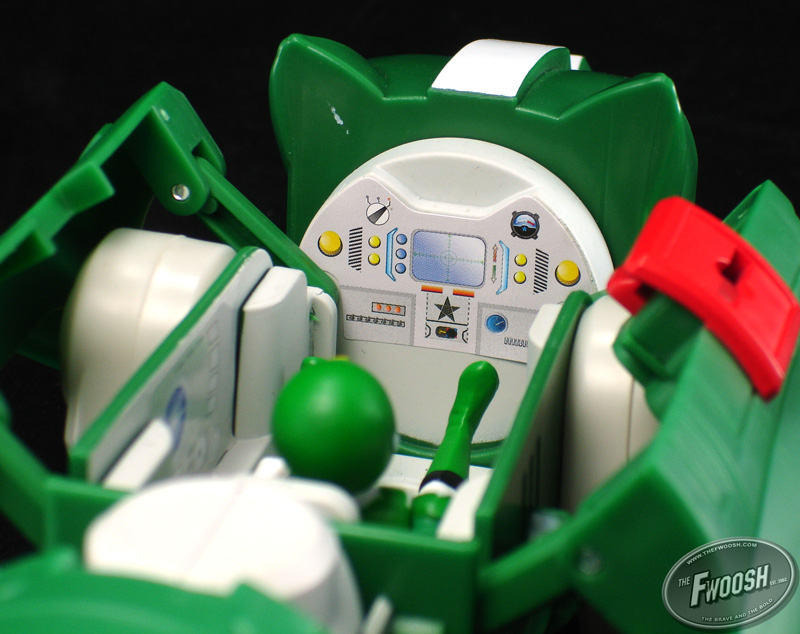 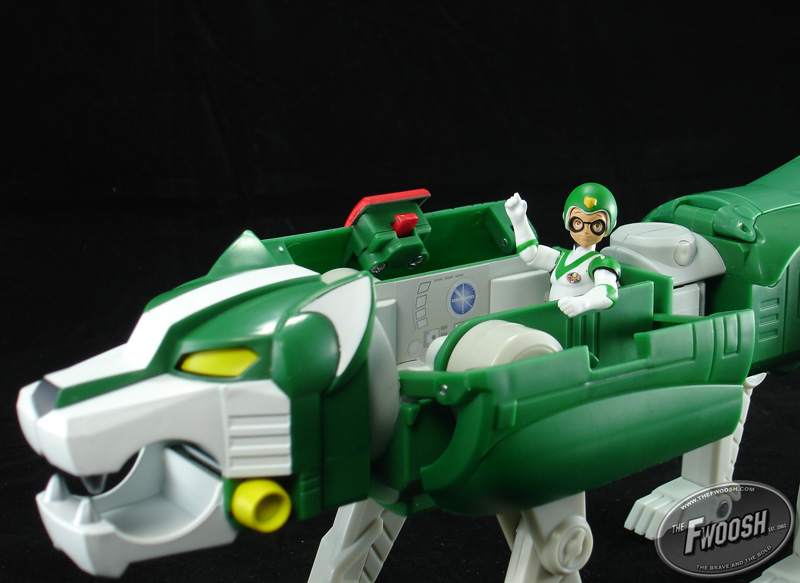 Of all of the Lions released thus far, the Green Lion most certainly has the most curves in its design. The body and head feel more rounded than the particularly boxy Red Lion. The green color seems on-model, but compared to the red and yellow used in the other two Lions, it feels more muted. It still retains the animated Lion feel in the color, but the color does not pop out at you as vividly as with the Red and Yellow. Most of the paint is cleanly applied, but there are a few places around the head on this sample that bleed a bit into other colors. Since the green is darker it is more apparent than, say, on the Yellow Lion, but for the most part the color has stayed where it is supposed to. I still hold to my theory that all of figures and Lions were produced at the factory at the same time in order to ensure consistency and compatibility in terms of building up Voltron, and the plastic and paint quality seems to suggest that with this release. Okay, I have to hand it to Mattel for making sure that the Black Lion is the last one released in the group so that you can’t assemble any part of Voltron until the end. It is mean and torturous, but a good anticipation strategy to be sure. Pidge and the Green Lion ensure that you have the big-brained shorty of the pilots and you now have both arms of Voltron as well. By the arms of Voltron! That sounds like something I should be exclaiming from time to time, you know – kinda like “By Odin’s Beard”? Anyhow, I am starting to really appreciate all of the subtle differences in the individual lion designs being retained in this line, and unlike most of the other Matty Collector lines, each pilot figure has gotten a unique body with no sharing. That is good because I don’t think anyone wants a skinny Hunk or a too-tall Pidge. I realize that the aesthetic might not be for everyone, but I am having a great time with the line so far, and we are 3/5ths of the way there. Princess Allura is up next and we might have a look at her sooner than you might expect… 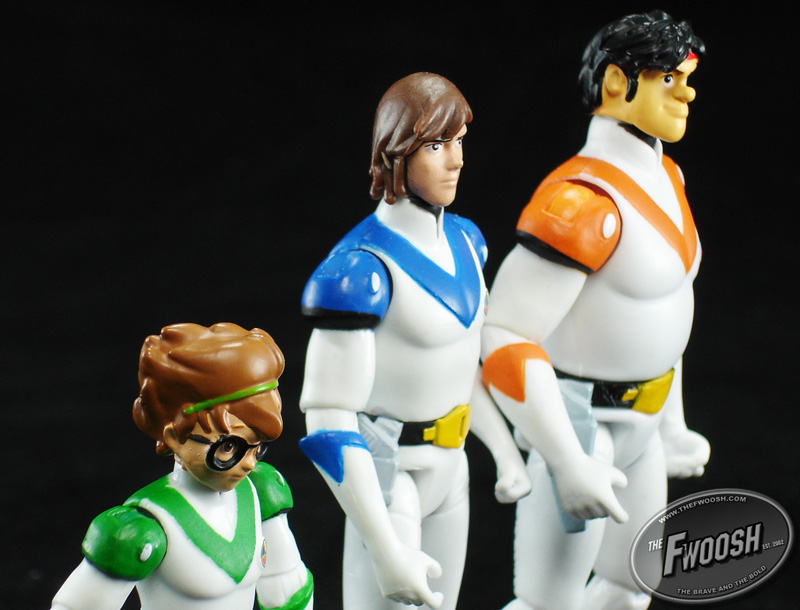 *Thanks for tuning in, I know everyone is excited to add Pidge to the lineup (don’t forget he goes on sale tomorrow), but is dying to get the big man himself. Thanks also to Natalie and team for sending this along for a First Look!