The Mighty Spector is the second newly-created character from the Masters of the Universe Classics 30th Anniversary subline, and a controversial creation to say the least.  Check out more pics and thoughts on this figure after the jump! After Skeletor® banished King Randor® to Despondos™, he seized his rightful throne and dismantled the Eternian Palace Guards™. Loyal to Marlena and the Royal Household, Lt. Spector™ was cut off from the rest of the Masters of the Universe® when he was thrown into a time portal and flung into the future. In this new time, he served King He-Man® and was given a special suit reverse-engineered from the Cosmic Key™. Using its powers, Spector could travel into time, fighting for the Royal Family as their agent throughout Eternia’s history. Spector uses his Vortex Suit to turn the tide in battle, loyally serving the King and Queen of Eternia®. 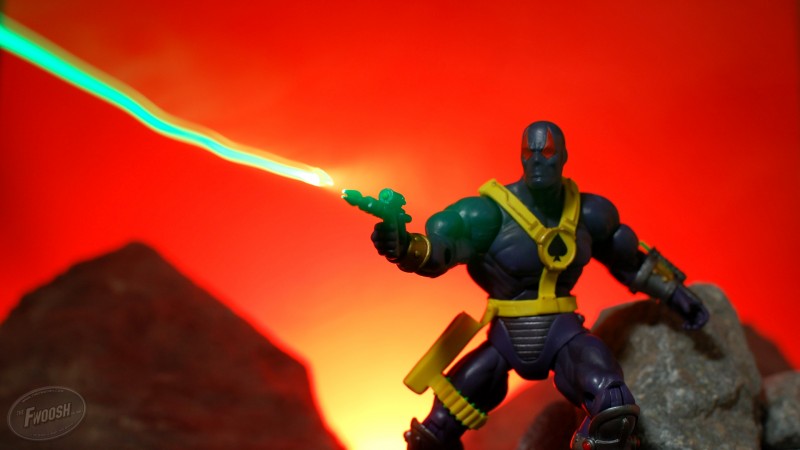 First off, can I say that I love that his name is John?  It’s such a common name, but if feels appropriate for a fantasy setting.  I think it’s cool that he was flung into the future, and we get our first MOTUC-canon look at the future of Adam and possibly the “Dare, Son of He-Man” storyline. Creator Scott Nietlich has said in interviews that Spector is kind of like a time cop, keeping people from messing with the timeline.  I’m assuming it’s probably Skeletor, but the bio doesn’t really say.  I would like it if there was an explanation of who exactly Spector was fighting in the past or why Spector was uniquely suited for being the time traveling agent. 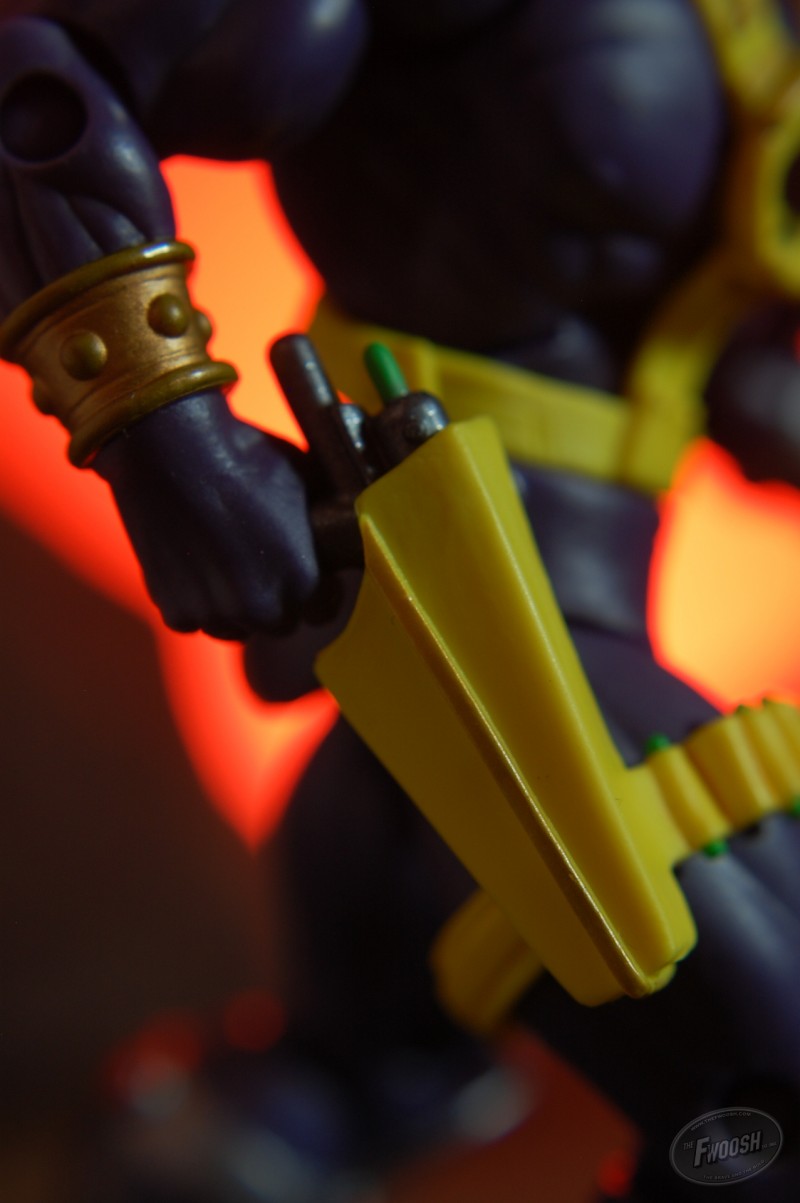 Spector comes with removable web gear and holster, a blaster, and a time-travel wrist device that can be swapped out with another device that has an energy blade.

The web gear is made of very flexible, bright yellow plastic.  It’s a little too bright in my opinion, and it looks kind of cheap and too toy-like for my taste.  If you look at the concept art, the purple and gold color scheme is less jarring and looks much nicer when the web gear is a darker yellow-gold. The blaster is made of a nice stiff plastic and has a cool, “1980s-blaster” style to it. It fits nicely in Spector’s holster. My favorite accessory on this figure is the time-travel wrist device.  This device takes design cues from the cosmic key from The Masters of the Universe live-action movie. The device is removable from the wrist peg, and can be swapped with a version of the device with an energy blade.  An energy whip was also planned, but unfortunately had to be scrapped for cost reasons.  It seems to be a bad year for whip accessories. Spector has Man-E-Faces’ boots, left hand, and lower torso, along with He-Man’s upper torso, shoulders, biceps, and right forearm.  The new pieces are the accessories, the head sculpt, and the left forearm. The head sculpt is a perfect superhero mask, and recalls some of the more expressive Deadpool artwork by Alvin Lee where you could actually read Deadpool’s expressions under the mask.  On this figure, you can definitely make out the facial features under the mask.  The time-travel device gauntlet has a miniature control panel that reminds me of the self-destruct device the creature from the film Predator used, right down to the control keys with alien glyphs. The time-travel device itself has the look of a miniaturized cosmic key grafted onto a light sabre.  The blade itself has an interesting texture that gives it an almost shimmering feel that I like quite a bit.  I normally like the open hands on MOTUC figures since they are more expressive, but I feel like Spector would have benefited from a fist on his right hand.  I feel like the guy would make a fist while attacking with his energy blade. 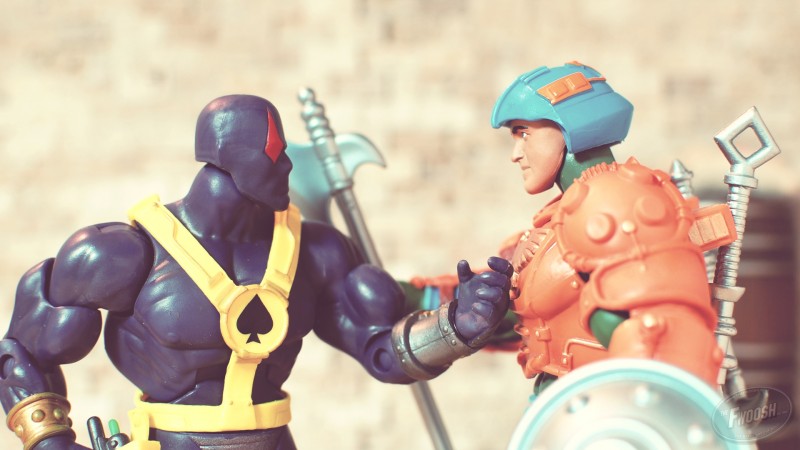 Spector has the standard MOTUC articulation.  The leg movement is a little bit hindered by the plastic of Man-E-Faces’ lower torso piece.  It seems a little harder on this figure than on Man-E; otherwise, his articulation has a good range of motion.  He actually looks up a lot better than most MOTUC figures since he has no hair or helmet getting in the way.  And I’m glad to say the web gear does not impede articulation at all. Paint on Spector is minimal.  He is cast in mostly the purple plastic of his costume and the purple is a nice, flat plastic.  In hand, I don’t see the shimmery effect of earlier Spector figures we saw in previews, but it does show up a little in pictures. The only paint issue I see is the web gear–it’s just too bright and fake looking.  There is a slight darker shading around the leg strap that helps make the plastic look a little less fake, but it isn’t used enough to knock down that bright yellow plastic look.  A different, darker plastic would have been nicer. 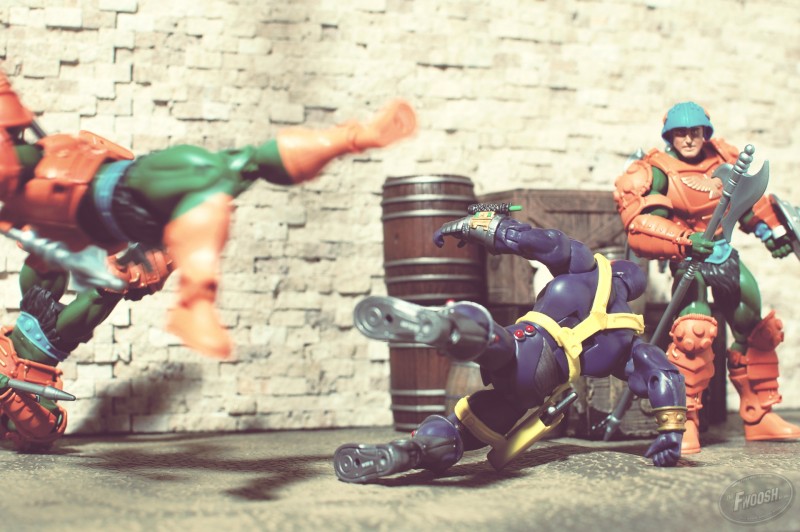 I also don’t love the spade symbol on the chest armor.  I’m not someone who opposed the inclusion of that symbol as a design choice, but in practice, the dark black symbol tampo on the bright yellow plastic looks a little cheap. As I said before, The Mighty Spector is a fairly controversial character for MOTU fans.  I did not immediately love the design since it recalls comic book characters from the ’90s of the Liefield and Lee school of character design, and that was not particularly a favorite era of mine.  Whatever the artists’ original intentions, the design feels like a character out of Blacklash, WildC.A.T.S, Youngblood, or some other Image Comics book.  That’s not a bad thing, necessarily, since I think there is room for a wide variety of genre characters in MOTU, but it’s not an aesthetic I particularly love. That said, the design has been growing on me over time, and after finally getting this figure in hand, I find that I really like it.  The figure itself is pretty fun to mess around with.  The blaster and the energy blade lend themselves to a lot of fun poses. 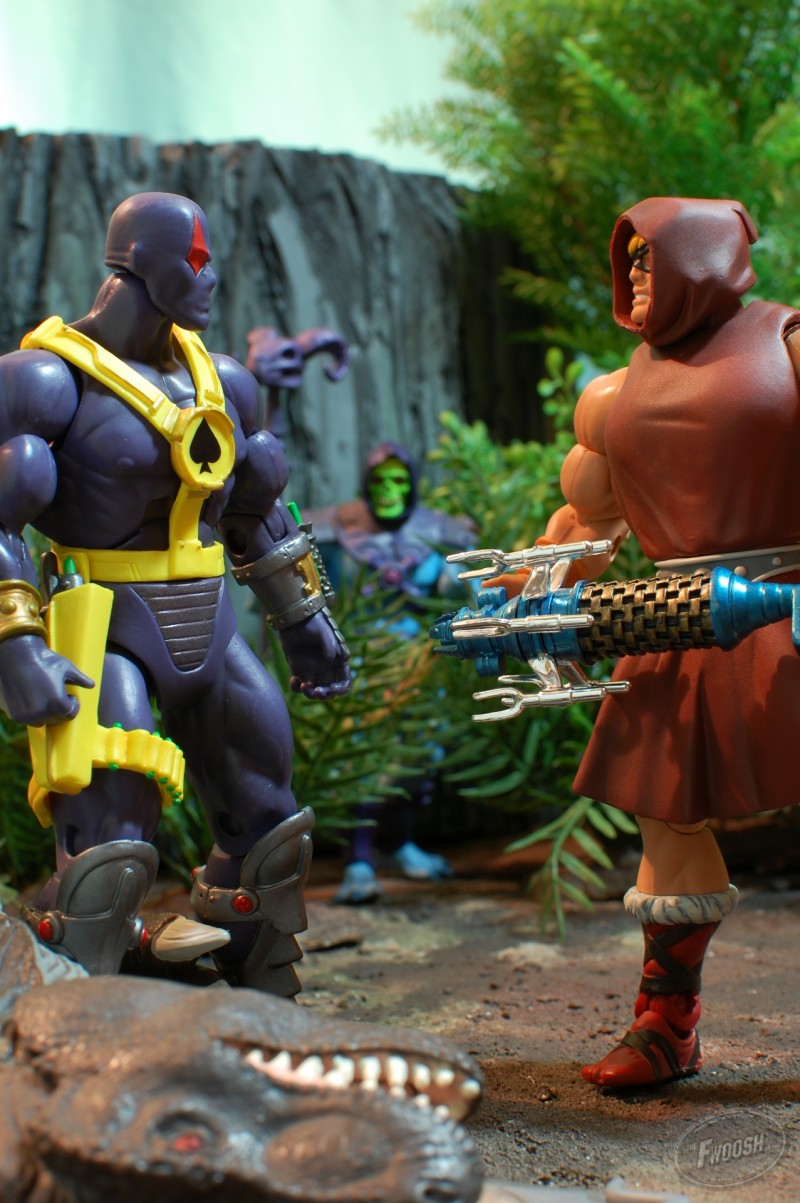