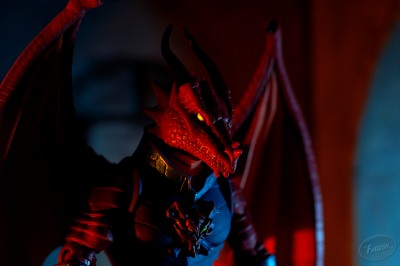 Draego-Man is the first newly created character in the Masters of the Universe Classics 30th anniversary subline and was probably my favorite reveal from the 2011 SDCC.  I know at this point many of you have already moved on to the May MOTUC figures and the previews of  the June figures, but if you haven’t seen enough of this figure from April, click through for more pics and thoughts about Draego-Man! 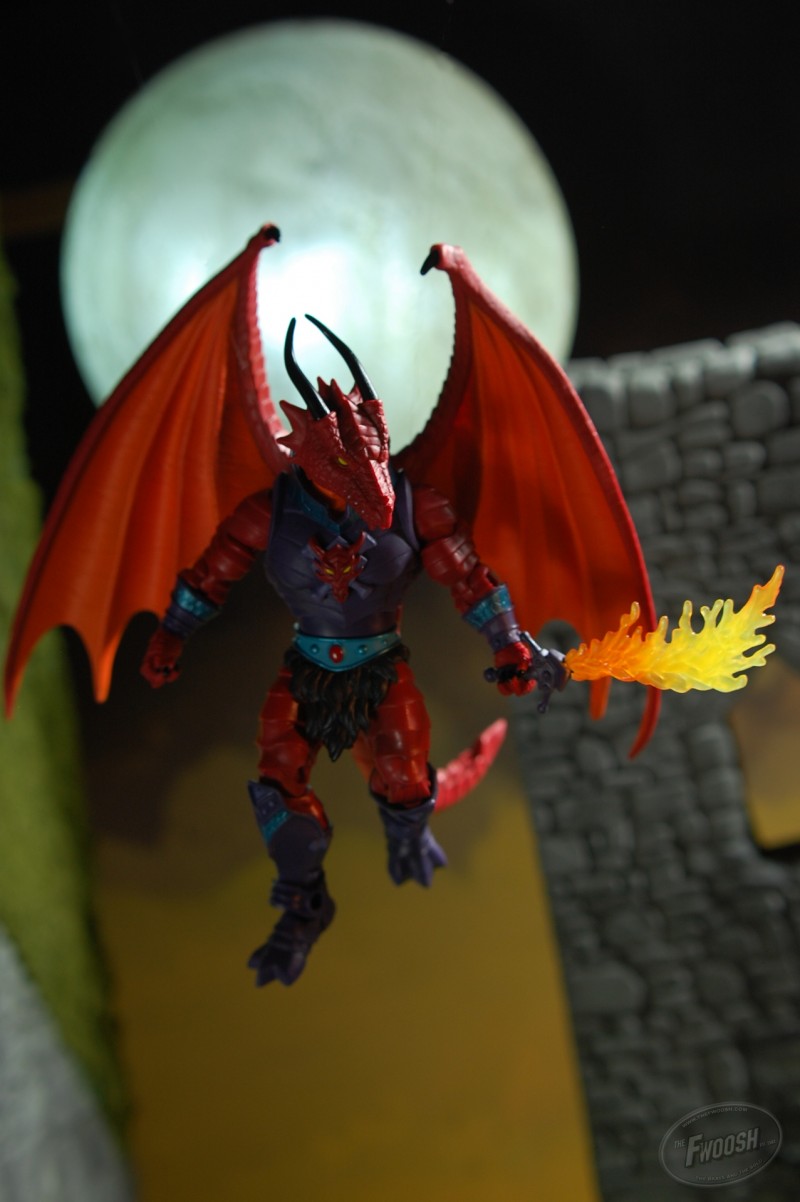 During the Great Wars, the Dragons of Darksmoke fought in many epic battles against King Grayskull® and the Snake Men™. A magical half human half dragon creation of the Great Black Wizard, Draego-Man™ was shunned by Granamyr and allied himself instead with the Free People of Eternia®. After the Truce of the Three Towers, Draego-Man™ became so disgusted with the humans that he isolated himself from all civilization, living as an outcast in the Caverns of Rakash. After several millennia of bitter retreat, Draego-Man™ discovered Skeletor’s plans to enslave his dragon kin and use them as weapons against the Royal Palace. He returned from hiding to join Skeletor’s Evil Warriors seeking revenge against all who betrayed him. Draego-Man™ uses his flame breath and ability to manipulate fire to battle for the side of evil! 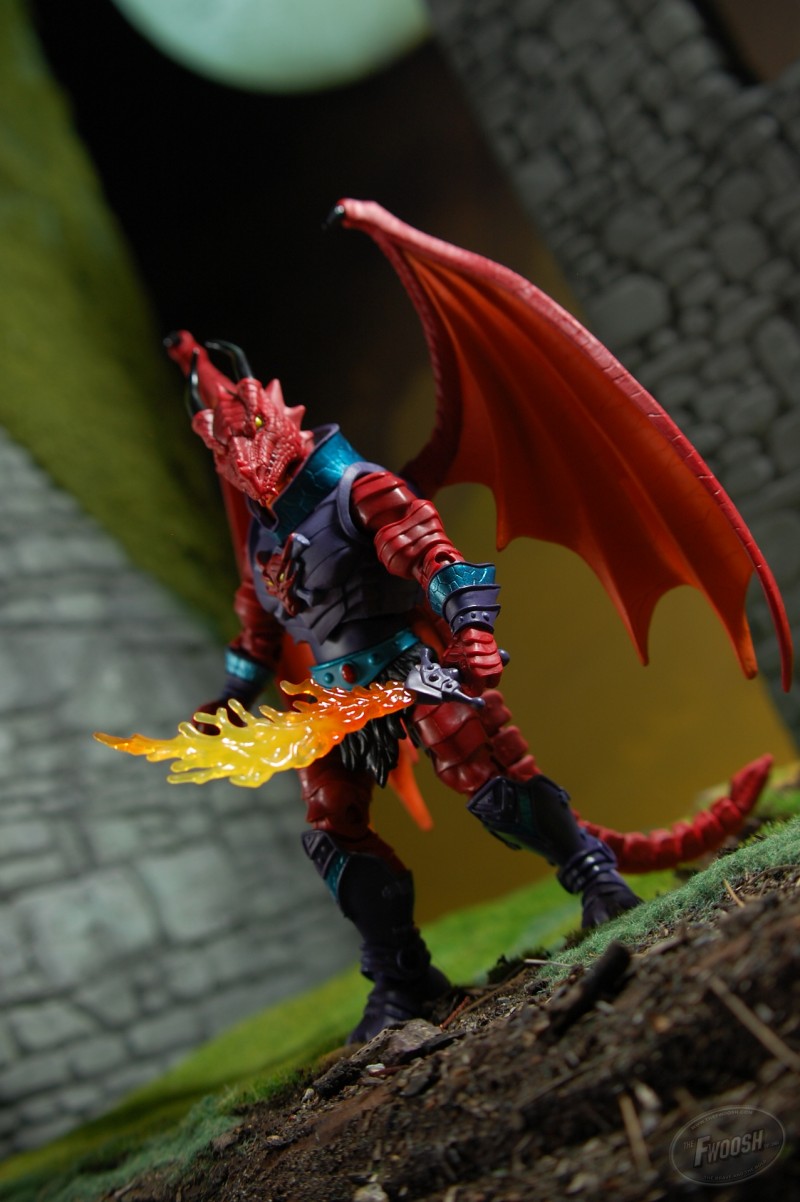 There are a few things I like about this bio.  First off, Draego-Man is a magical construct of a Great Black Wizard and he is unique, not one of many Dragon Men.  A lot of the seemingly unique monstrous MOTU characters like Whiplash, Clawful, and Beastman were revealed to be members of a single race of people, which makes them a little less special in my view. 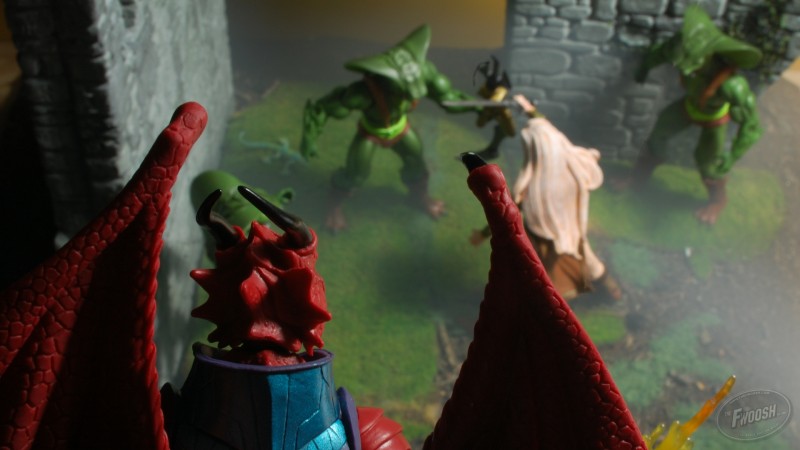 I like that Draego-Man is singularly unique, and I also like that they introduce yet another heretofore unknown MOTUC character in the Great Black Wizard.  Off-hand mentions of characters we’ve never seen before makes the world feel just that much larger to me. 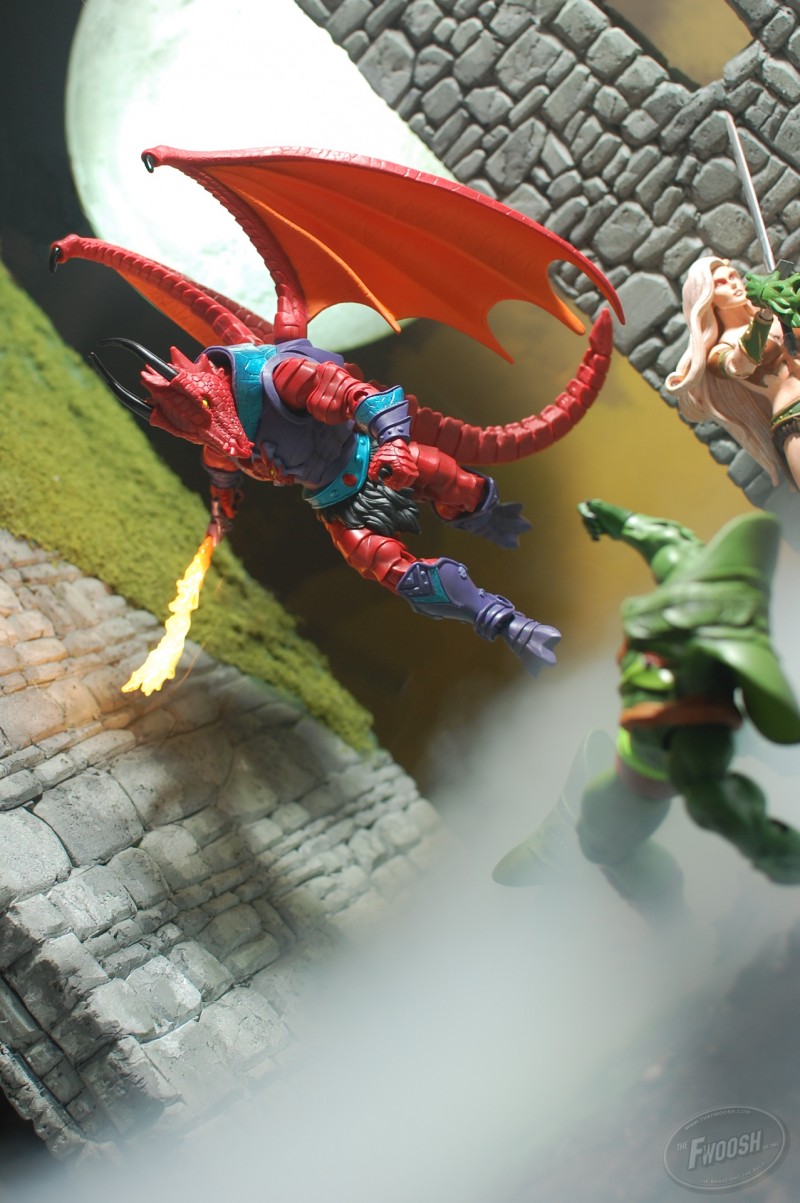 I also appreciate that he has complicated motivations and can’t really fit in with anyone.  The dragons in the Filmation series seemed very mercurial and capricious, so it makes sense to me that this character could spend thousands of years in retreat because of slights (real or imagined) visited upon him by dragon- and mankind alike. 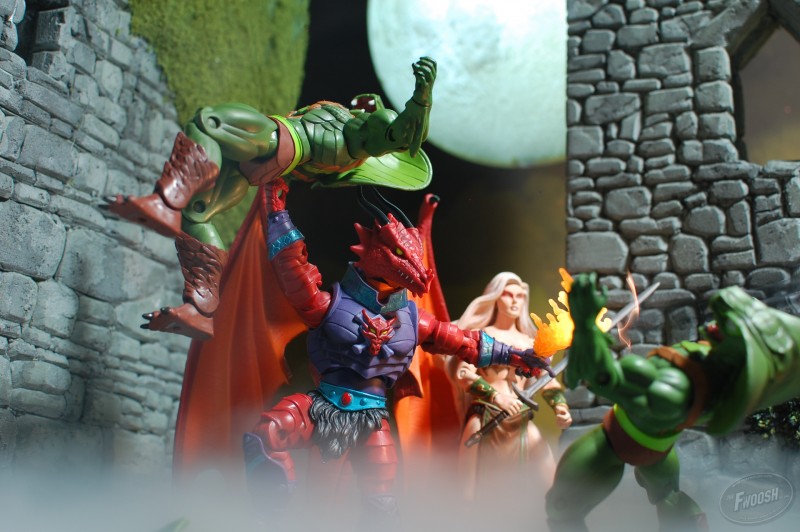 It’s also nice because you can add this guy to a Pre-ternian hero display or with Skeletor’s Evil Warriors, although he does look a little too cool and powerful to me to be one of Skeletor’s flunkies.  He’s got the presence of a faction leader like Hiss or Hordak.  Heck, given this guy’s bio, I could imagine an MOTU episode where Adam and his warriors turn this guy around to the light side. 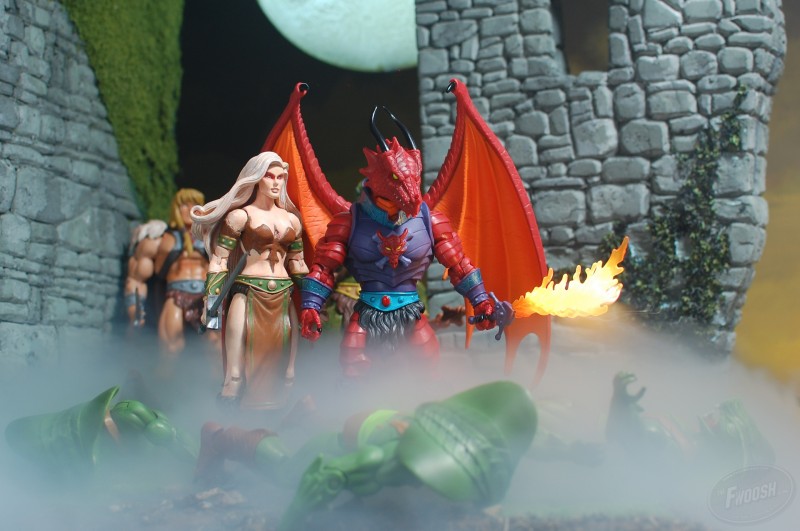 Draego-Man comes with a flaming sword and that’s it.  His armor is not removable, though the wings can pop on and off.  The prototype of this figure had a shield with removable flames, a regular sword blade, and a flaming whip.  Unfortunately, Mattel said those additional items did not cost out and they were not included with the production figure. 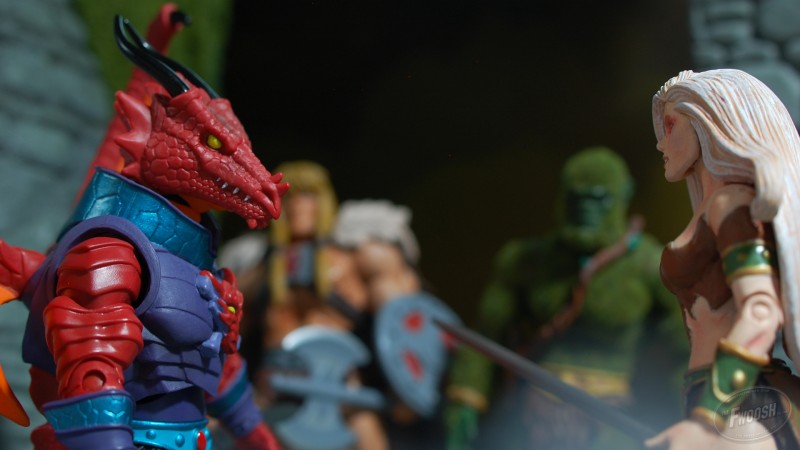 I really miss the flaming whip and the shield.  I can live without the normal scimitar and the flames for the shield, but I really wanted that shield and that flaming whip.  I hope that they can figure some way to release them eventually.  I wouldn’t count on a weapons pack appearance , but maybe the shield could come with Granamyr as a part of his treasure room or with some other figure. 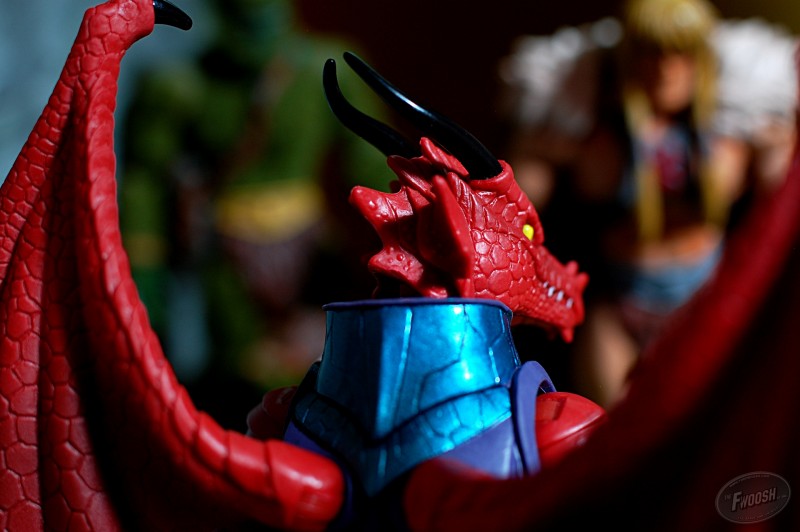 The translucent flaming sword that we did get is pretty nice, though the sharpness of the flame sculpt has been dulled a bit by the production process.  It almost looks water-like.  Liquid flame, maybe?  Still, the translucent flame sword makes for a unique weapon and was a lot of fun to photograph. 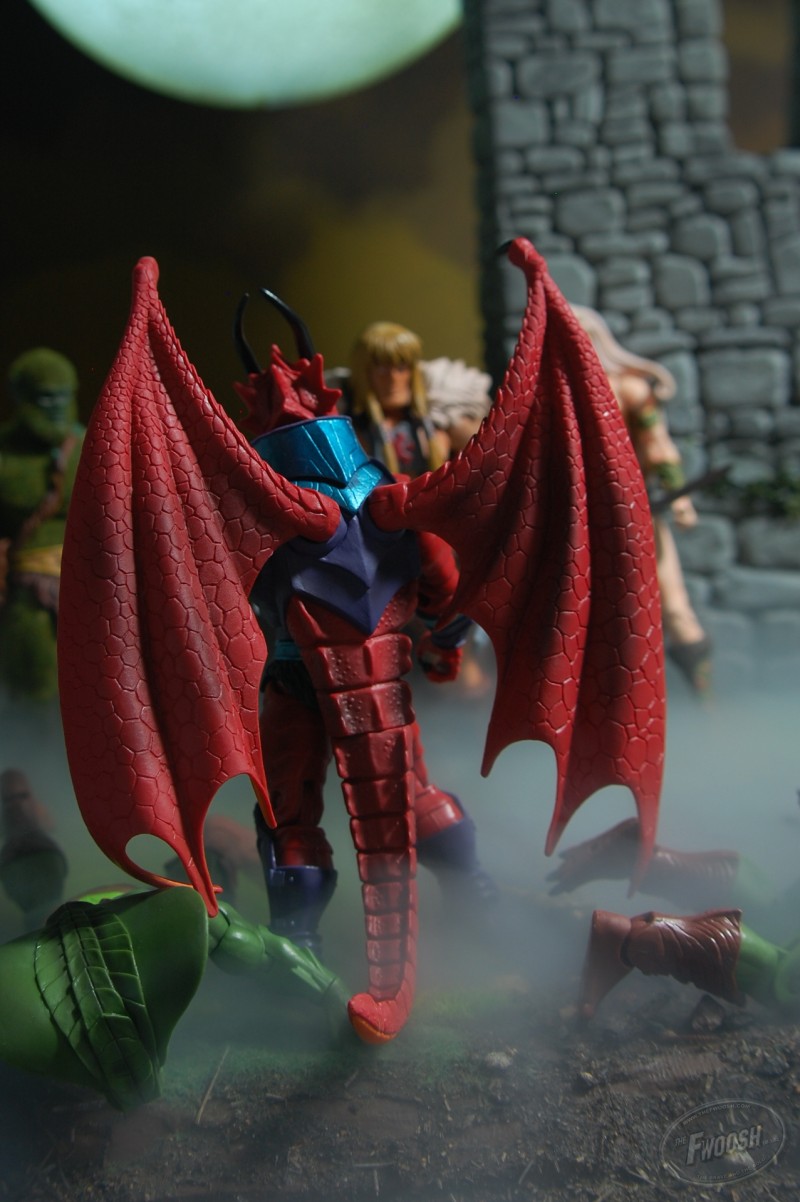 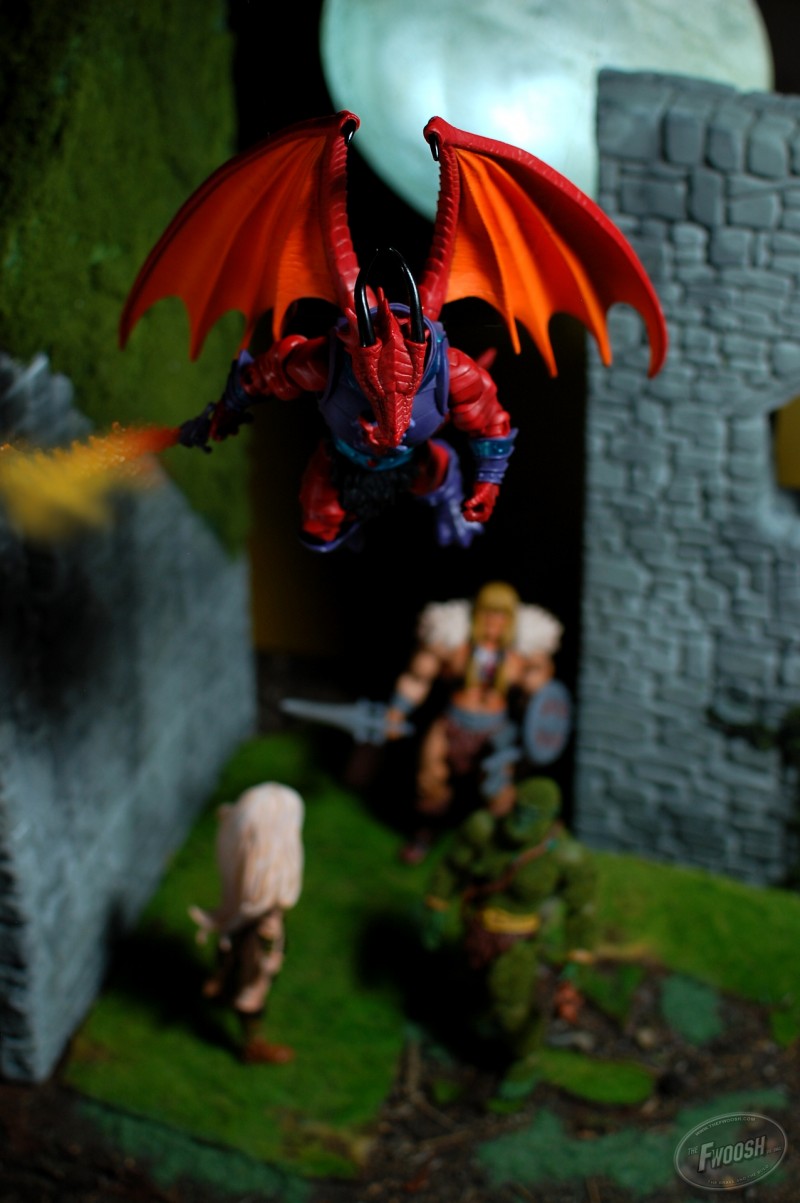 Details on the new armor and gauntlets were sculpted to match stylistically with the armored He-Ro boots. Including the scale and rivet details from those boots on the other armor parts gives the gear a clear visual cohesion. 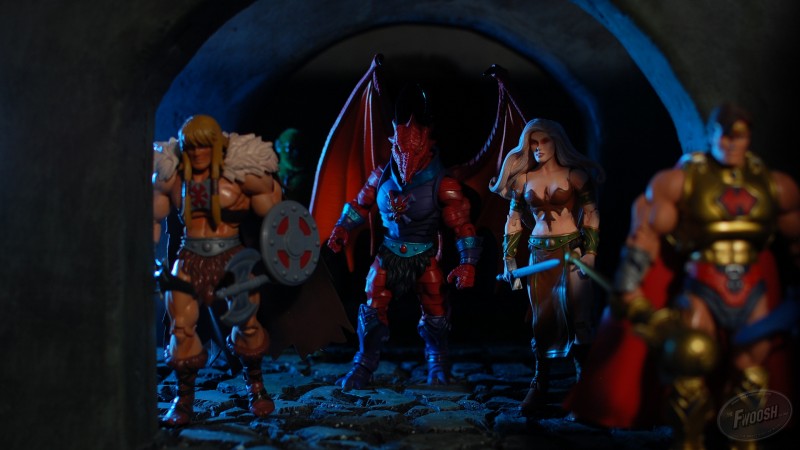 The Horsemen used some of the established visual language of the line to create this character.  The chest armor is somewhat reminiscent of the Battle-Armor He-Man’s chest armor, and the gauntlet shapes recall Skeletor’s finned forearms, and the riveted bracers of characters like Tri-Klops and He-Man.   The nods to earlier designs help make this character feel like a part of this world, even though he is brand new. 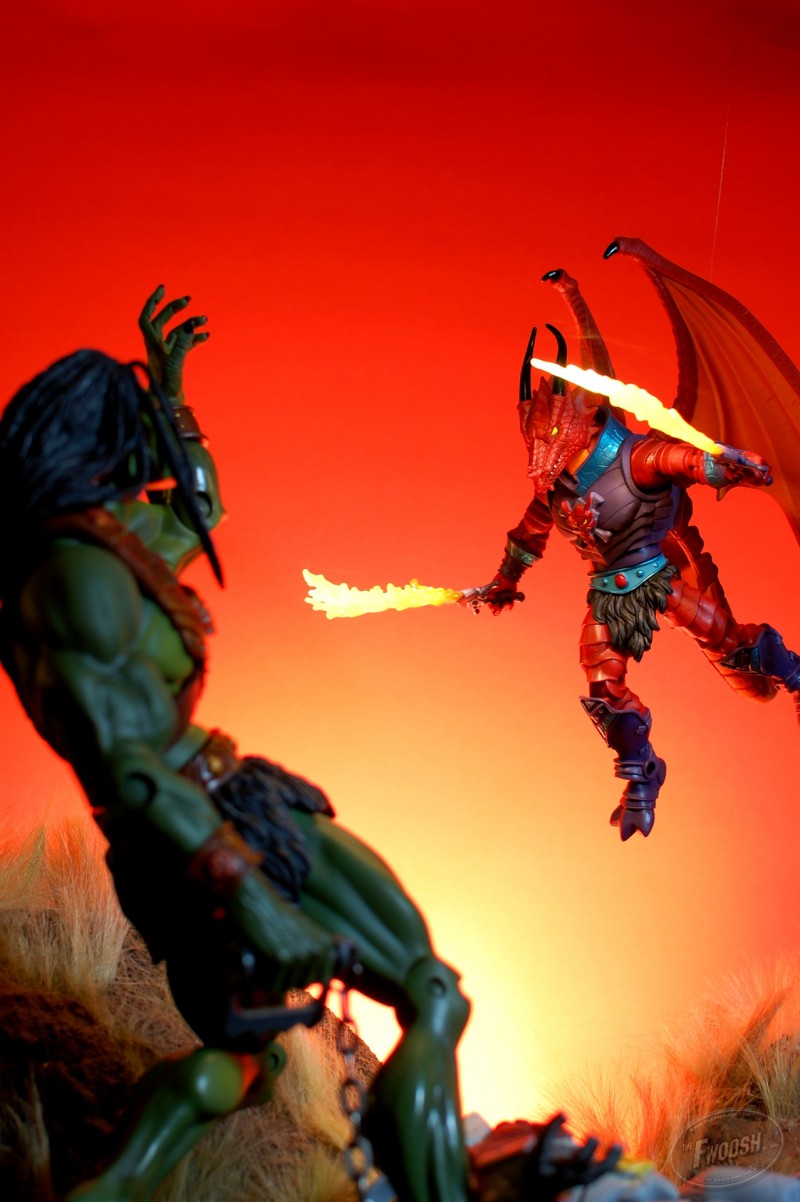 The wings are sculpted in a resting position, and have a lot of great detail with scale textures on the outside and leathery texture inside.  One small thing I would have like to have seen done differently was wings that extended for flight poses (similar to Hawkman’s wings from DCUC), but the wings are so beautiful that I can’t complain too much. 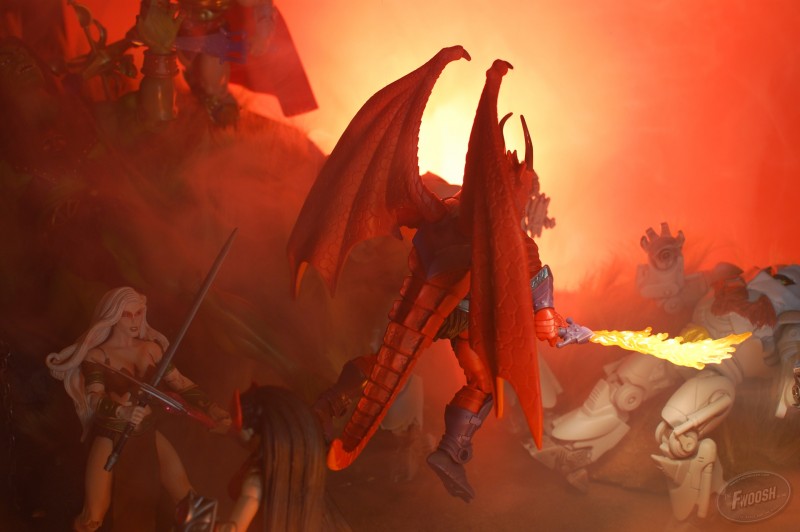 The head sculpt is the highlight of this figure for me.  I love all the different scale textures and all the horns and frills make for an interesting face.  The sculpt is reminiscent of a classical fantasy dragon, and I feel like it conveys a cunning mind behind his deep set eyes. 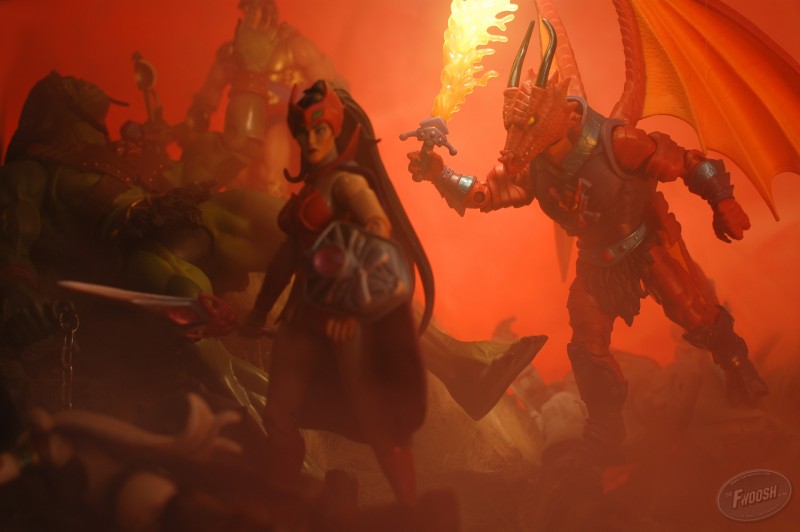 I saw this bit of Draego-Man artwork by artist Chris Edwards, and it made me wish Draego-Man had an articulated jaw so he could spit flame at his enemies.  In fact, I was thinking if Draego-Man had been a figure back in the ’80s, his action feature might have been one of those flint gizmos that shot sparks out from his mouth.  Again, it’s not a complaint as I love the head sculpt as it is. 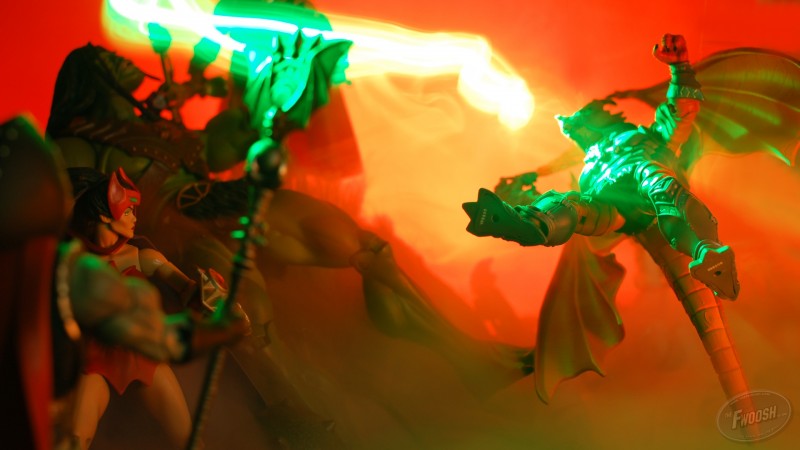 Draego-Man features the standard MOTUC articulation with the addition of swivel hinged wings (similar to the wings on Buzz-Off).  The articulation has a good range of motion and is all nice and tight except for the ankles.  That’s unfortunate because those ankles have to support the large tail and wing combo on Draego-Man’s back.  Fortunately, you can pose him standing nicely on the shelf supported by that massive tail if need be. 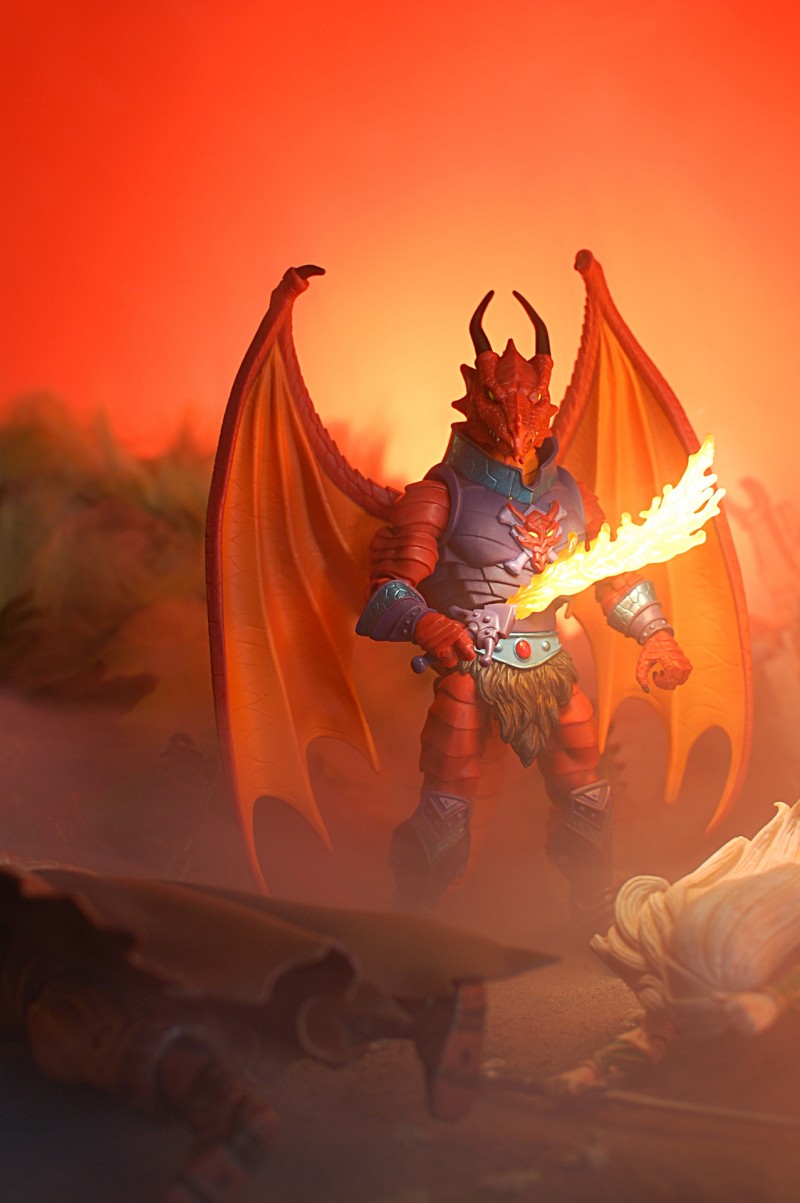 Despite some of the budgetary cuts, Draego-Man has lived up to the excitement and expectations that the original prototype generated all those many months ago.  The design feels very MOTU-appropriate and since dragons are a staple of the fantasy genre, it feels natural to include a dragon-themed figure in this fantasy-influenced line. 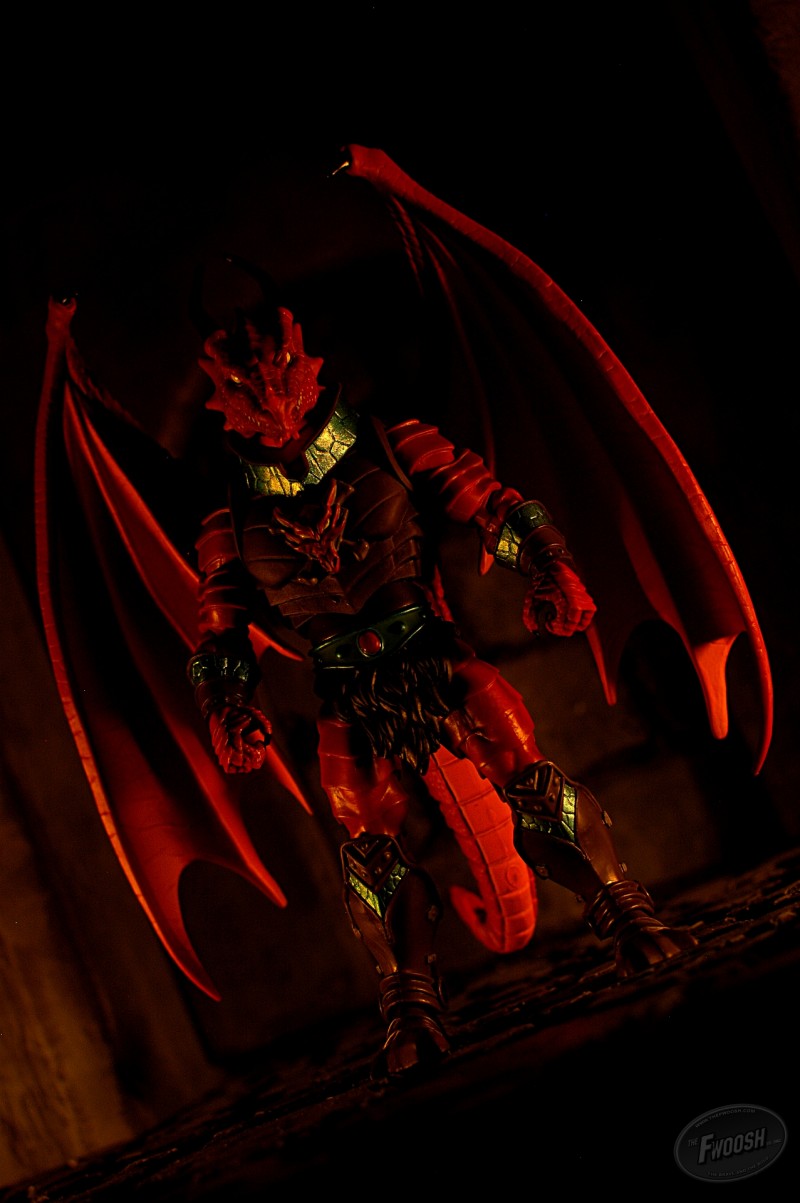 I love the idea of adding new characters and concepts to the MOTU world, and to my eye, Draego-Man fits in with the rest of the line perfectly. 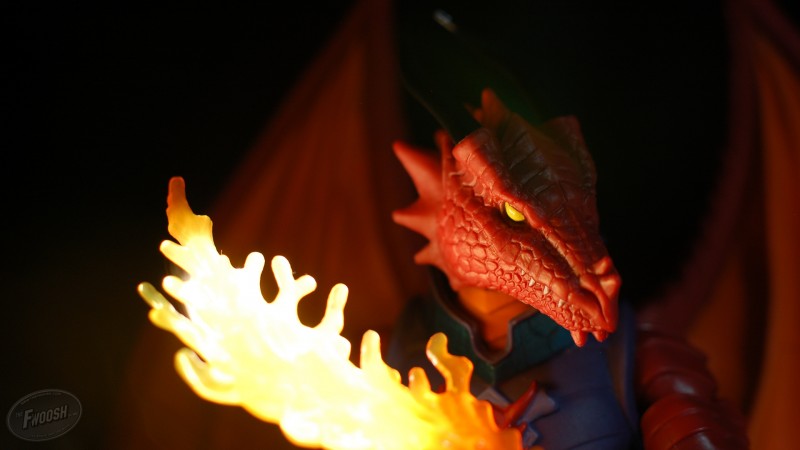 The addition of new characters through concept art or completely new designs adds variety to this mostly nostalgia-driven line. I do love the faithful recreation of classic characters in the MOTUC style, but the new stuff adds a nice element of the unexpected to the line. 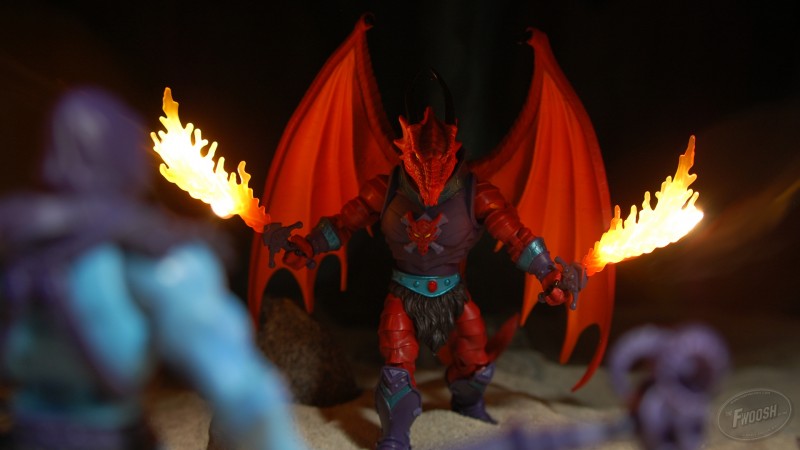 Based on Draego-Man, I would love to see more 4 Horsemen-created characters added to the line, hopefully at least one a year.  I’m a fan of their work, and it would be fun to see what new characters they could add to this world. Draego-Man is my favorite MOTUC figure of this year, which is saying something considering the great figures already released in 2012. 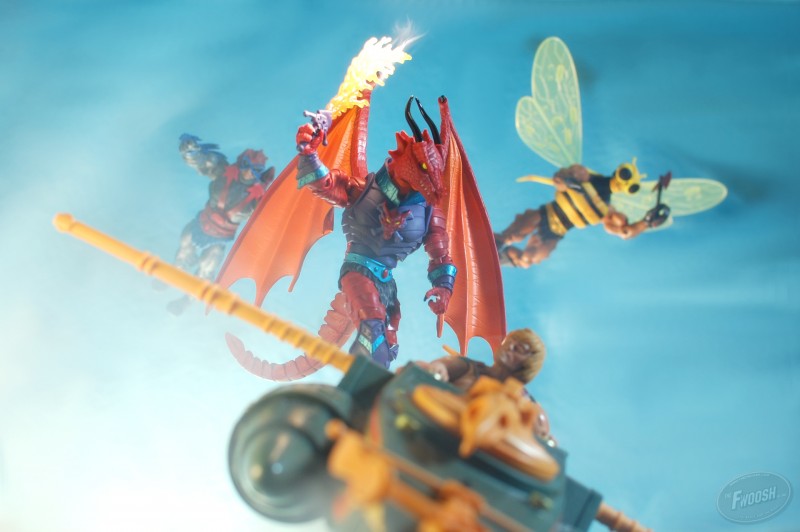 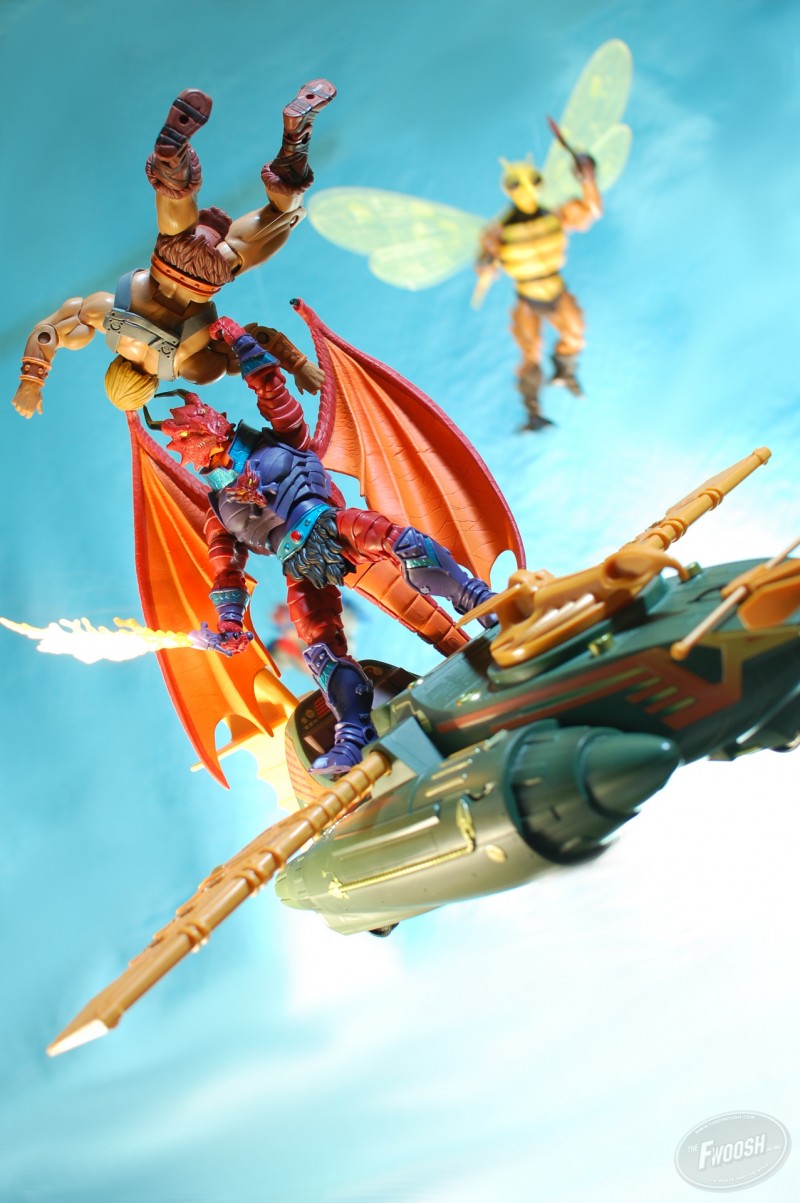 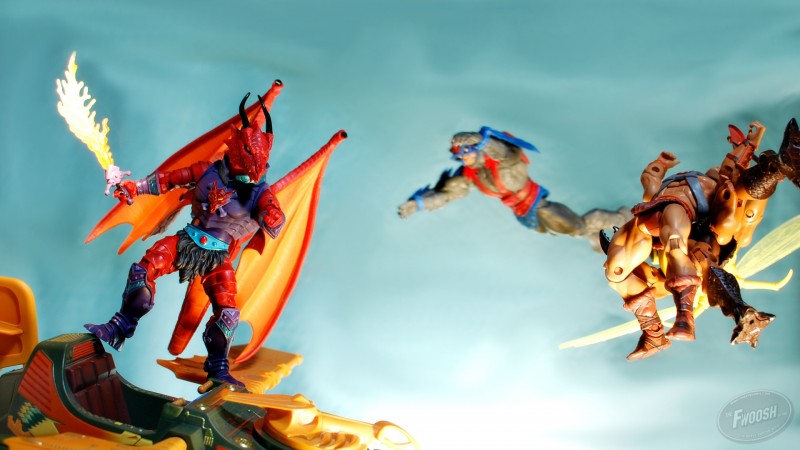 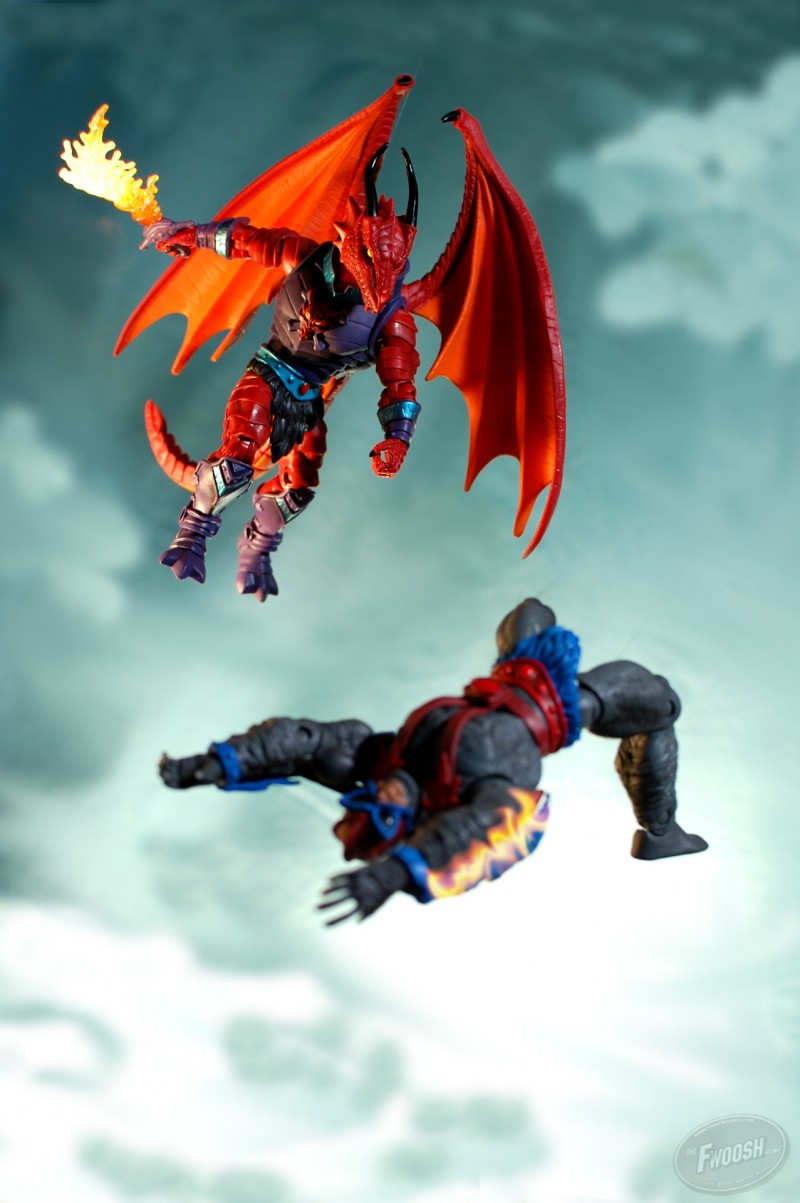