The Scream Man and I tag team on a look at S.H. Figuarts Kamen Rider Fourze. Honestly, it is more Craig writing and me providing pictures. I was going to add a bunch of thoughts, then read Craig’s article and realized I didn’t have much to add. You like “Dude he’s superposeably awesome.”

3….2…1….HENSHIN! A Swirl of smoke and light and Kisaragi Gentaro is transformed into the latest in a long line of Japanese heroes known as Kamen Rider Fourze! 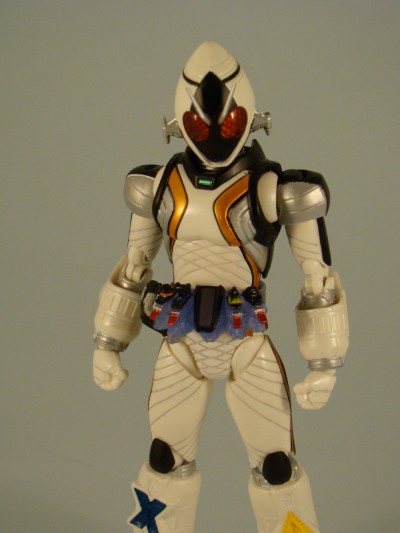 It’s history time! Kamen Rider started in 1971, one of the earliest in what are now referred to as Tokusatsu heroes. Super Sentai, another of the Tokusatsu shows, are what the US converts into Power Rangers each year, but while that franchise found a strong footing in the west, the lacklustre ‘Power Rider’ (based on Kamen Rider Black RX) and  Kamen Rider Dragon Knight (A pretty decent adaption of Kamen Rider Ryuki) didn’t do as well over here, so the line has never taken off. Each Rider series is largely independent, and theatrical films usually team the Rider with the previous series one in the few crossovers. 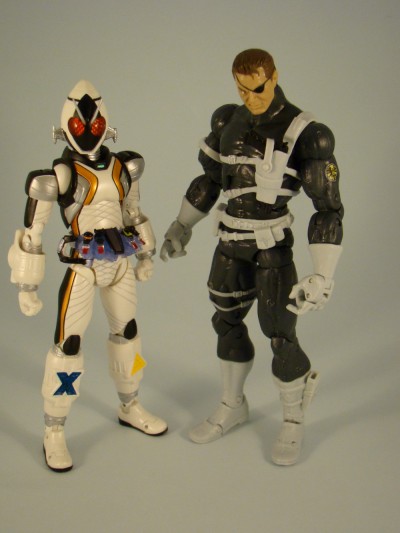 Kamen Rider Fourze is the latest series, still airing in Japan as of this writing. It is the 40th Anniversary show for the franchise, and centres around the aforementioned Gentaro, who inherits the Fourze driver and small boxes called Astro Switches, which power Fourze and allow the transformation to his armoured form, as well as offering various powers dependent of the switch used. On the show 37 switches have been seen so far (As of episode 27) and there will be a total of 40 used by Fourze. 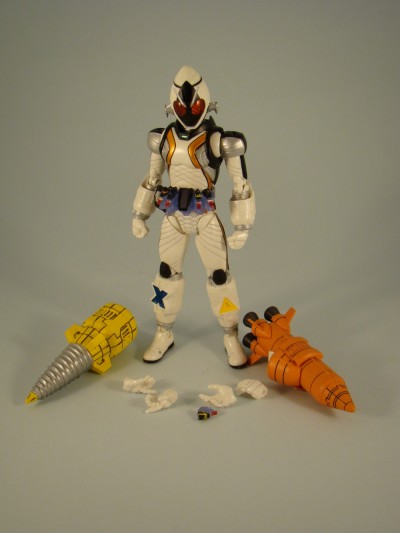 The fan favourite line, S.H. Figuarts, produced by Bandai, has made over 220 toys and is the premiere collectors line for Rider fans. While they have just started dipping into Super Sentai, and there are some Dragonball Z, Tiger and Bunny and One piece figures, Kamen Rider makes up the bulk of the line. As the newest series, Fourze toys have just started to hit, and that’s what we will start off with today. 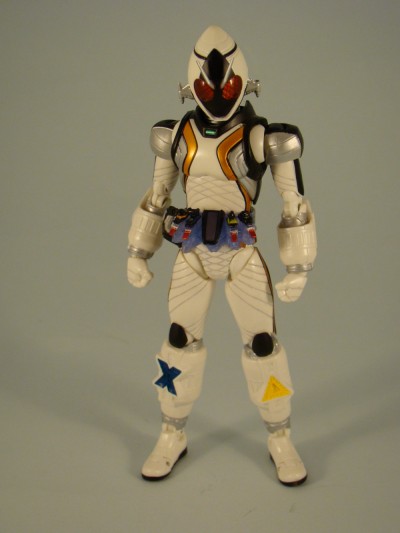 Fourze comes in what’s referred to as his ‘Base States,’ a White and Black Spacesuit design. Now, the design has a mixed reaction amongst fans: I admit when I first saw it i didn’t like it. It’s the egg shaped head with the angry eyebrow antennas; it’s hard to get past how goofy it looks. But then Fourze is a goofy show, more so than a lot of Rider series, so having the funny helmet kind of works, and after watching the show a while you get used to it. One cool thing is this figure is SLIGHTLY shorter than other Riders; as a teenager, Gentaro is younger than most of the other characters who have appeared. 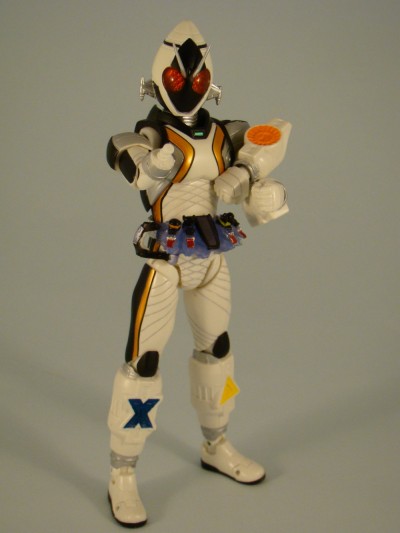 While white is the main colour, orange and Black trim, and individually etched and painted black lines flesh out the suit and give it real depth and texture. The helmet is black and white with clear eyes that have a segmented pattern underneath them (A common trait on Rider figures) and some silver on the sides and neck.  The arm and leg modules each have a shape and colour that corresponds to the switches used in that spot: Orange on the right arm, Black on the left, Blue on the right leg and Yellow on the left. These limbs can be swapped out at the knee/elbow joint with the Astro Switch components. 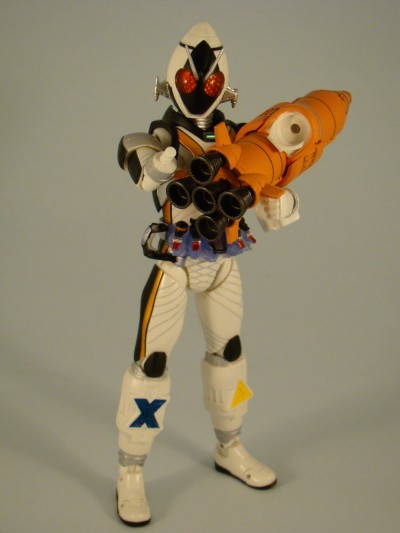 Articulation on Fourze is the same as many other Figuarts: Amazing. These figures are what make me look at some western lines and just shake my head: they’re amazing figures, and almost any pose is possible. From the top down: Ball jointed neck at the head and shoulders, ball jointed shoulders which are ALSO in ball sockets allowing them to roll back and forth as well as up and down, ball socket chest and waist, forearms swivel, double elbows and wrist swivel and hinge (as well as various interchangeable hands, like a spread open posed and a  fist), ball jointed hinges which are also on a hinge that lets the swing down, allowing the legs to traverse up PAST the line of the hip for high kicks, double knees, ball ankles and hinge feet with toe movement and side to side rockers. Basically, you can pose him any damned way you like, almost nothing is out of the question! Note: On mine (Craig’s and pabs’s) the right hip is a little stuff, and I actually popped it off and shaved down the ball socket a little, as I was worried about breaking it. No one else I know has this issue, so it may just be mine, but it’s something to pay attention to. 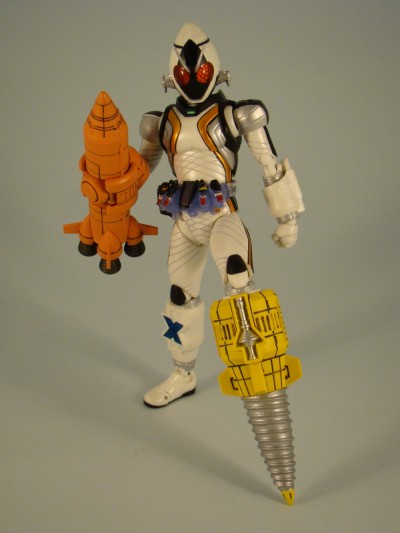 The Fourze driver has been created pretty well in miniature, though I admit the centre screen being blank bothers me a bit. Given the fine detail work, having a small version of Fourze with the limbs lit up red wouldn’t have been a huge deal, and I think leaving it blank was a shame. The lever can work, and with some posing you can get Fourze into a pose like he is pulling it. Each of the Switches are removable and here is where I offer the first warning: Be VERY careful with the switches! They are really tiny and pop our when bumped! (Pabs – totally, the kids lost one and we went into panic mode. Easy, people, we found it in the sofa) It’s a cool feature though, and it means you can have the switches in either open or closed position (for ones that change like that) which is a nice touch. Base states comes with two modules (More on that in a second) and further modules are released with alternate forms, or in module sets. For now we’ll just look at the one’s that come with Base states. 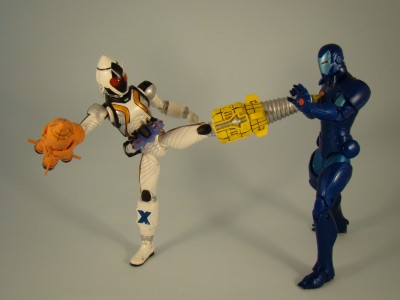 The four Astro Switches in base states are: rocket, launcher, drill and radar. Base states comes with two modules: rocket and drill, as well as the ‘on’ switch for drill when it’s in use. The limbs pull off pretty easily, but don’t be afraid to give a pull as they are on solidly. Rocket and drill are both fully painted: rocket is orange and goes on the right arm. It has black panel lines for detail, and a dark grey area for the engines themselves. Attaching just below the elbow (So the double joint is maintained (pabs – yeah so cool!)) The rocket arm looks pretty cool, and you can replicate Fourze’s flying pose, rocket punch, and the arm position for the drill kick limit break. The yellow drill is also panel lined, and has silver paint on the front and on the drill bit. Sadly, the drill bit doesn’t rotate, which I guess isn’t a big deal, but I was a bit bummed by it. It seems such an easy thing to add, so I’m not sure why they skipped it! But it looks fine attached, and the rocket drill Rider Kick still looks cool, so no huge deal. 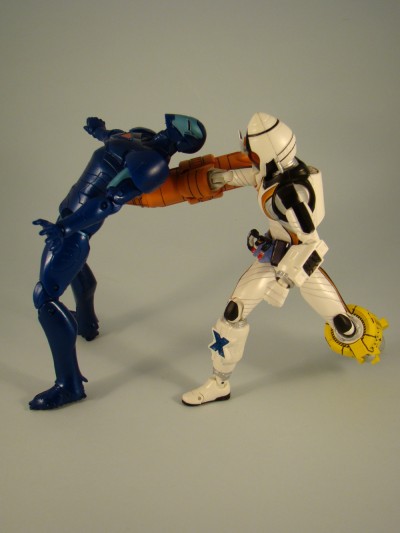 Overall Fourze is a pretty fun Figuarts, but your love or hate of him may rest in the suit itself. The show is so much fun that I personally like the toy a lot, but I don’t know if I’d recommend it as someone’s first Figuart. With the overall design and fiddly switches, it maybe better to wait till you have a couple. But if you’re a Figuarts fan, he’s a fun addition to the line, and the extra modules, while a little pricey, DO add a lot to the figure.

Talk about the figure here: 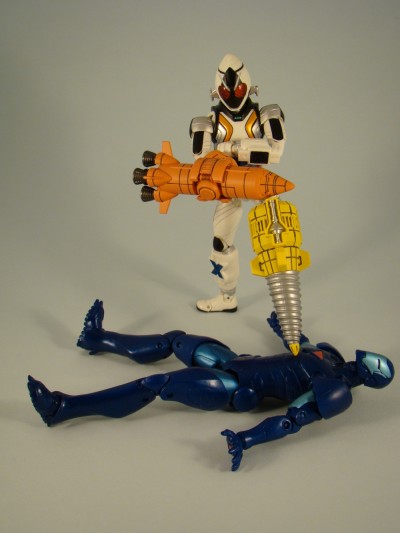 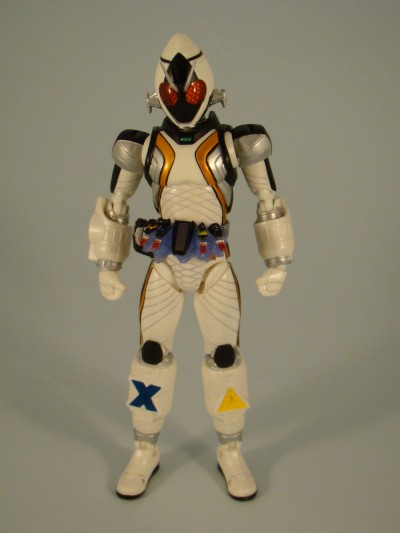 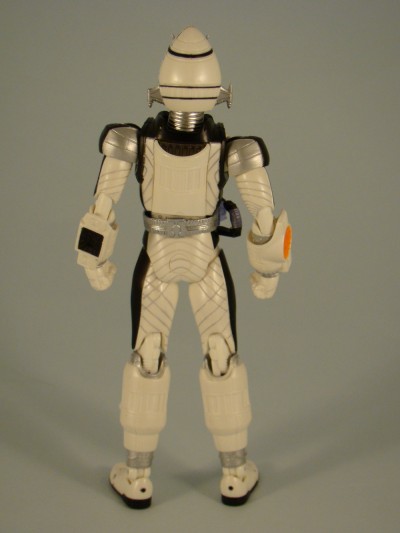 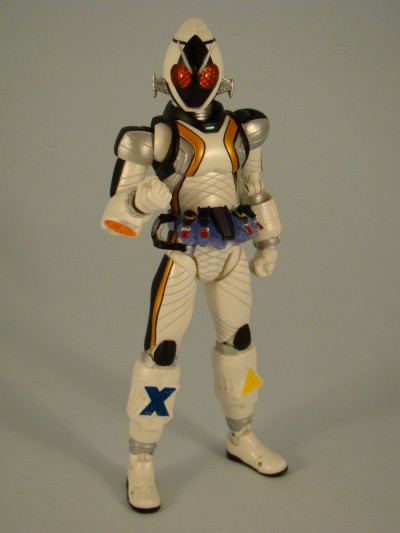 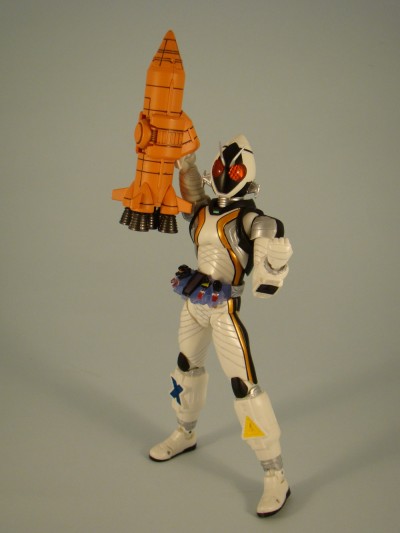