Last night I got a chance to see Marvel’s latest movie, The Avengers, at the Imperial theater in Copenhagen with a sold-out audience. 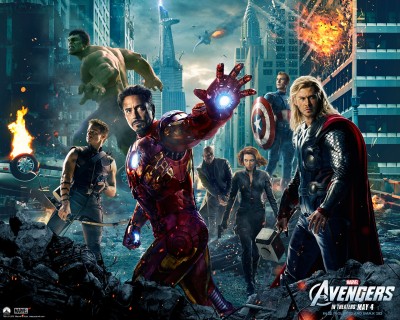 And it does not disappoint.

The evening started by heading off to The Shawarma Grill House on Strøget in Copenhagen with my wife, our two sons, my brother-in-law, his wife, and their two children. We all got a shawarma, fries, and hummus. The place is a tradition and is the only shawarma  grill bar in Denmark that we’ll eat at. The shawarma is amazing.

After downing our share of sandwiches, it was off to see the movie on the big screen. The Imperial is a huge theater and the energy coming into the building was high; we could feel the excitement of people wanting to see Marvel’s top heroes fight to save the world on the big screen. We made our way up the stairs to the theater. It was packed, only the four rows in the front were empty.

I sat next to my wife her nephew and my sons on either side. They were primed and ready. The previews started. Prometheus was first and my older son and I were practically high-fiving and chest bumping each other. He recently watched Alien and shared in my greatest space horror film experience ever. Now he wants Prometheus. Great way for the two of us to get our blood boiling.

Then the movie started. Holy shit.

It’s been a while since I’ve had a white knuckle experience at the theaters. From the get go the movie came out kicking. The kids were either jumping out of their chairs scared shitless as Whedon’s Hulk stalked victims or explosions rocked our chairs. We cheered as Captain America showed why he is the ultimate super hero and how he can still be relevant, we got lost in the banter between Rogers, Banner, Stark and Fury. We awed as modern Kirby-like monsters floated across the screen. And Oh-shitted more times than I can count, even when the credits were rolling. And we loved to hate Loki with every cell in our bodies.

The movie is amazing. It’s been a while since I’ve gone to a movie and gotten completely immersed in it. Granted, these are all characters I love, all characters I’ve dreamed about coming to life. And they did! They came to life, capturing every essence of what they are. It was amazing. I want to see it again. And again.

Sure, the movie is not without faults and there are many people that will begin to nitpick and find fault. That’s what we do. But during these 142 minutes I forgot about the soundtrack, editing mistakes, story hiccups and just got lost. I’m still lost.

Does a bear shit in the woods?

I haven’t spent a lot of time talking about the movie. I won’t, it doesn’t start in the States for a couple of days and I don’t want to spoil it. And there are spoilers. I wanted to talk about the experience. A few months ago I wrote about my childhood, the experiences with comics, fantasy, movies and music. Avengers was one of those experiences. It was a wow moment, a holy-shit moment. All I needed was some Hubba Bubba, a Big Red, an Avengers comic and 100 degrees F outside to make the experience perfect.