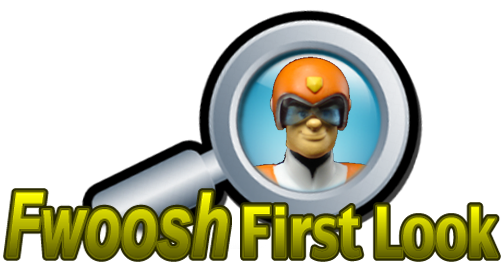 You know, I consider myself to be a pretty easy-going collector. It is my hobby so I get a lot of joy out of it and I can usually find something to like in most everything that I add to my collection. That being said, I am not really the most patient collector. Sure, I am okay with waiting on some of my favorite characters to get released in any given line (usually), but when new stuff starts hitting the store shelves I get that itch. I have GOT to have the stuff that I want pretty much right away or else it will start to eat at me. When the Arnim Zola Marvel Legends wave hit, I HAD to get him ASAP. That is usually the case with Build-a-Figures/Collect and Connects: I loathe having random pieces just sitting on my shelf, waiting for the next find to bring them all together. So, while I am really excited that I am going to be able to build a MASSIVE Voltron figure by the end of the year, the wait is already starting to give me the collector shakes a bit. I want it NOW! However, since the Big V is made up of five smaller lion ships I can get enjoyment from them since they aren’t just parts sitting around, quite the contrary, they are all playable vehicles. The wait is still tough though. Fortunately, April is the month for the second Voltron release on Matty Collector and the Yellow Lion and Hunk are joining Lance and the Red Lion in your feline space fleet. Come check out some pictures while you wait for Monday’s on-sale date! 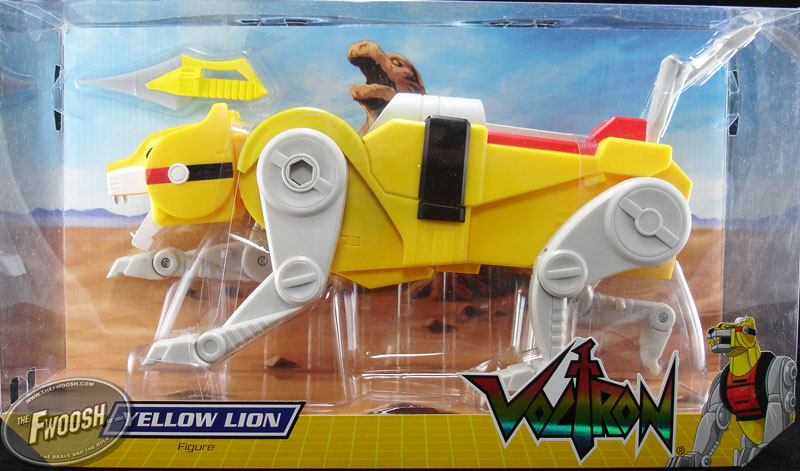 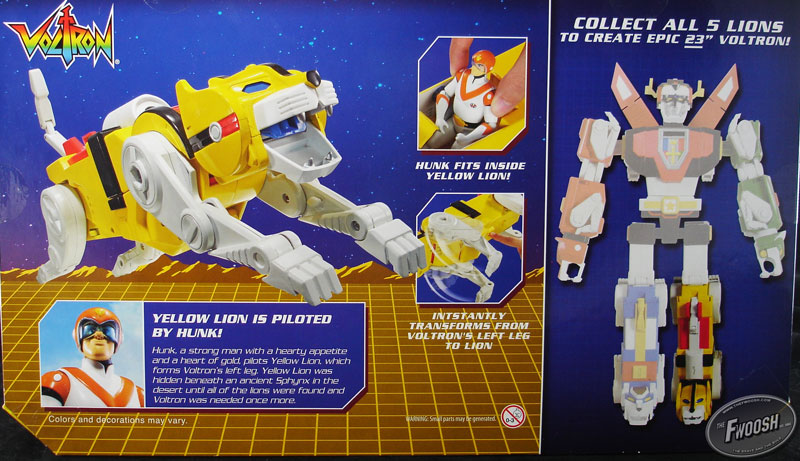 So from what I can tell, we are going to alternate arm and leg lions and finish with the Black Lion and the giant torso at the end in terms of release pattern for this line. That means we were due for a larger leg piece for this round and not only did we get that, we are also getting the largest of the pilots – Hunk! I have a soft spot for this soft-bellied pilot and he goes a long way to break that terrible stereotype set by Jek Porkins in Star Wars that the bigger fly boys are destined for deep space obliteration. This man and his ship follow the exact same release pattern as those that came before and the Hunk packaging (snort!) is inside of the Lion’s box (double snort!). 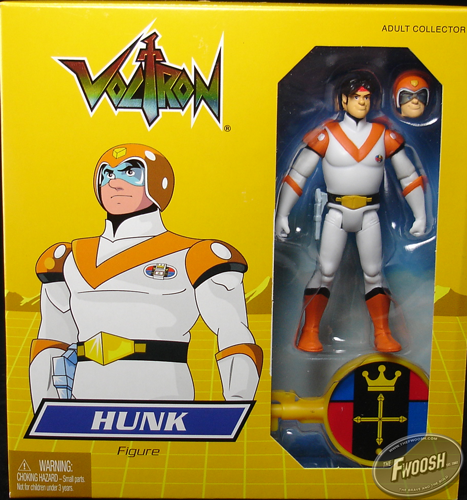 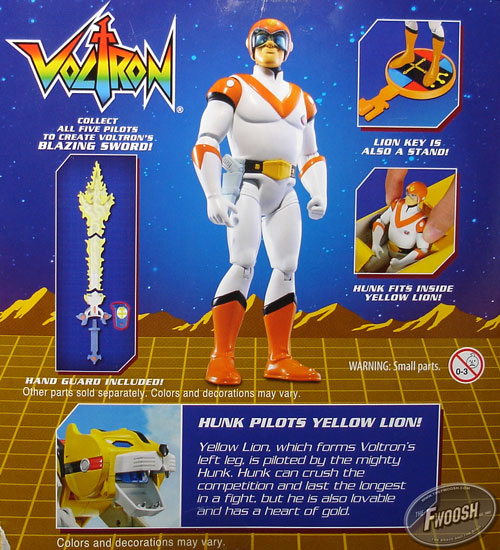 If you are like me and demand consistency throughout at toy line, then I am happy to report to you that everything with the Yellow Lion is pretty much right on par with the Red. I know I was a little worried when I originally thought about manufacturing consistency for a line that MUST work together to achieve the ultimate goal of building Voltron, but everything seems on the up and up thus far. I wonder if everything was manufactured or at least set up to be manufactured at the same time in order to achieve this. I thought that the fully-assembled Voltron that was shown at SDCC last year looked pretty much like a production piece so maybe they REALLY planned ahead for this for the sake of engineering. The plastic used for the Yellow Lion feels exactly the same and the sheen in the color is consistent with the Red. The off-white coloration used in the legs is exactly the same as well and the spring and lockdown features. The configuration of the folds is different due to this being a leg instead of an arm, but everything feels seamless to me. 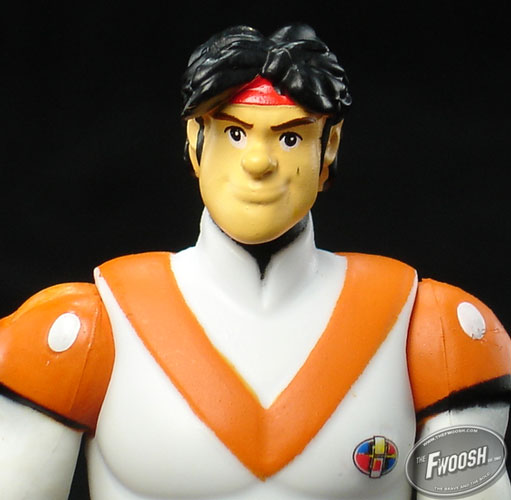 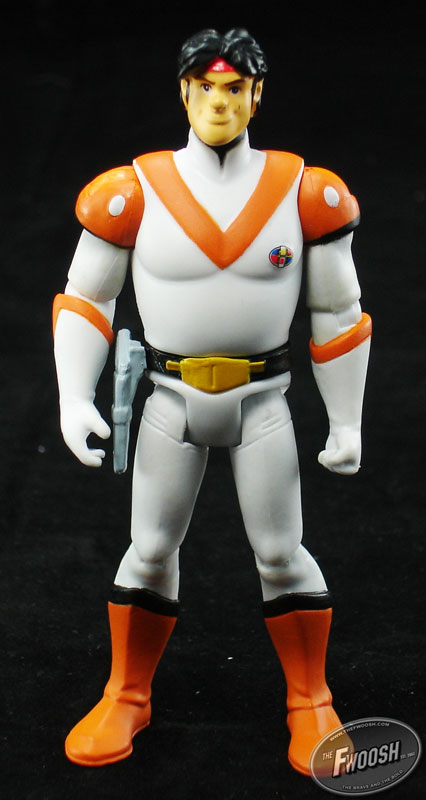 Of course there are differences in the Yellow from the Red as well and past the obvious color change, the former is MUCH bigger than the latter. I realize that legs are bigger than arms (usually) but man, even though I have seen Voltron fully assembled I still cannot believe how big he is going to be when all is said and done. Instead of the mid-body hinge to simulate an elbow, the head folds up to create the foot and ankle into the leg. It stands very well on its own and don’t think balance will be an issue once the big man is fully assembled. 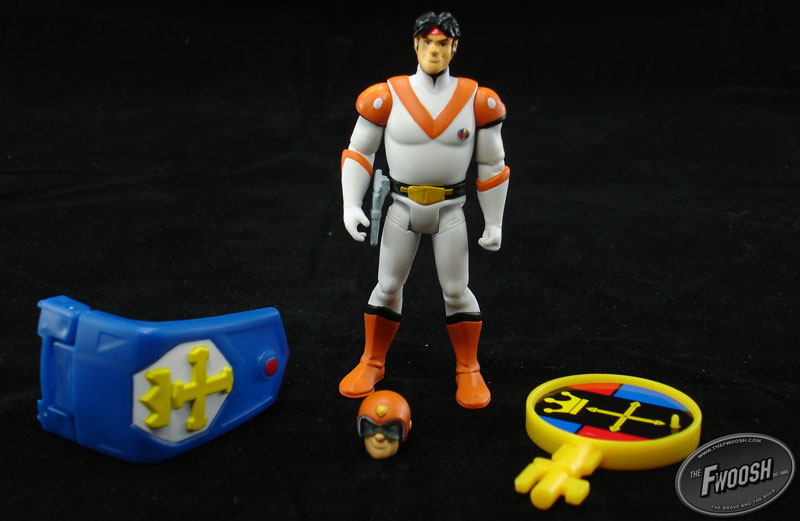 The cockpit also opens up (like a more traditional jet) instead of splitting to the side. The “key” base included with Hunk can open the hatch, but you do not have to use it. Hunk fits right inside and the control panel is represented with a sticker. The tail folds down to the top of the back of the lion but does not go inside of a compartment like the Red. While there is not a ton of paint on the actual lion, what is there is pretty clean and I don’t notice any significant slop. I am still not completely sure why the plastic in the legs is off-white but the painted accents are bright white. I would be interested to see if that is a style guide thing. 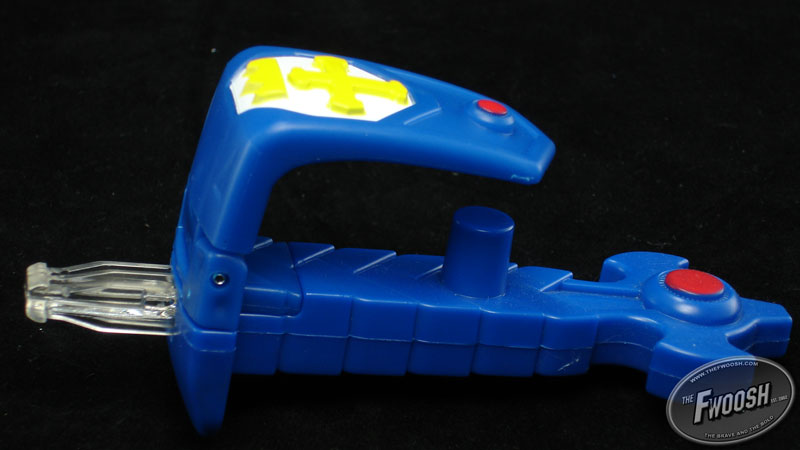 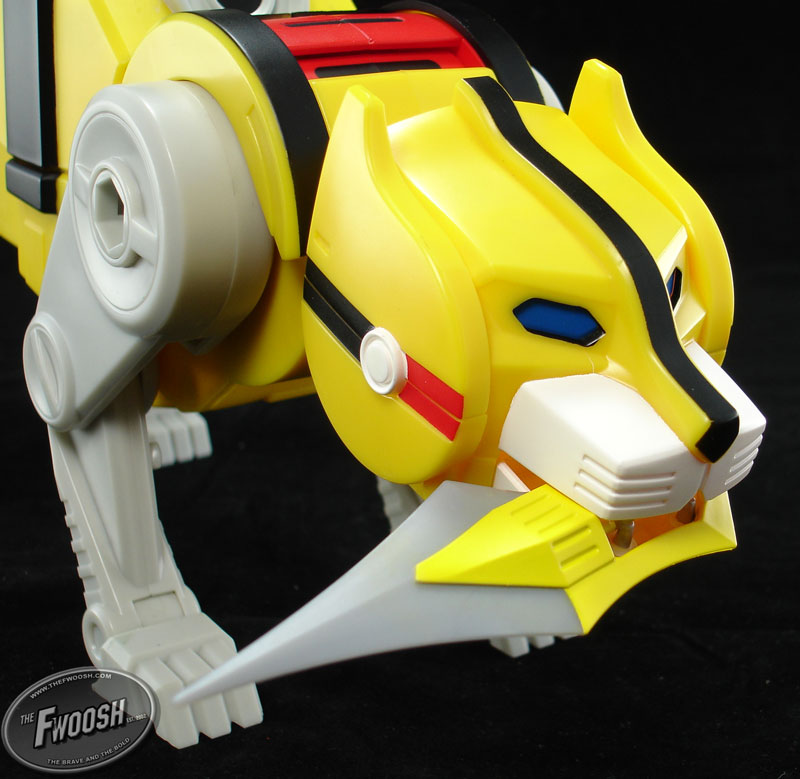 A concern I had when first opening the Yellow Lion was that, since he is bigger than the Red, if his legs would actually be able to support his weight in a standing position. I can report that they can and now that he has been standing in a static pose for a couple of days, it looks like it will hold. The articulation in the legs offer about as much posability as the Red Lion so if you are familiar with that scheme, you will know what to expect. 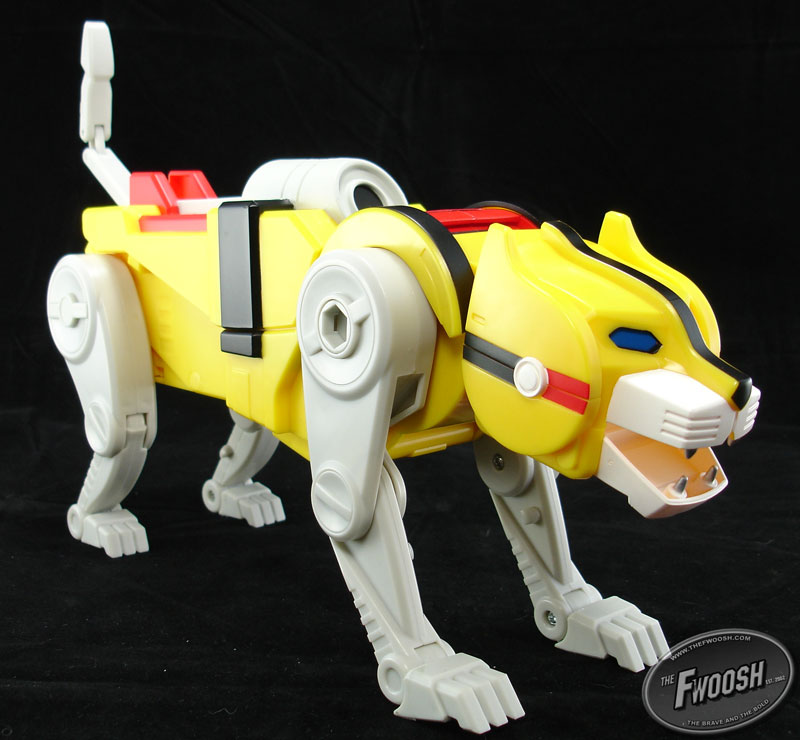 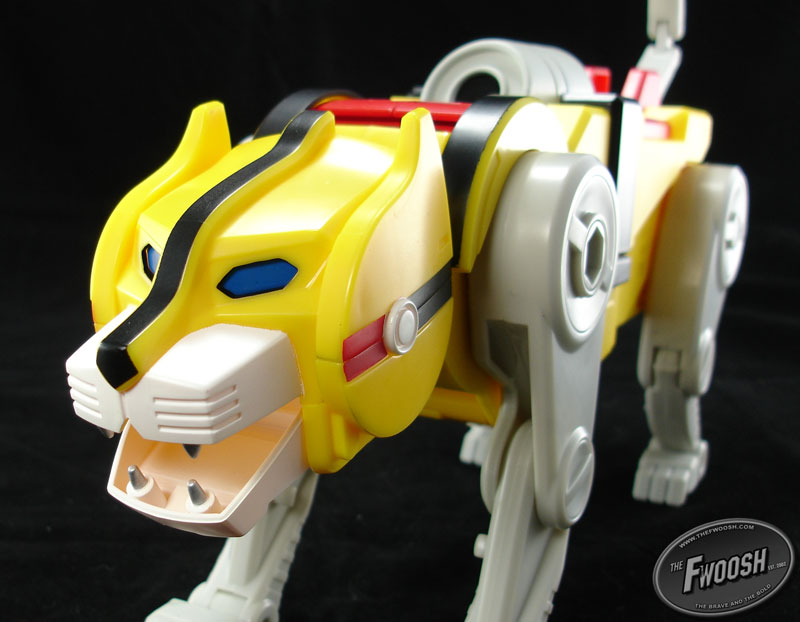 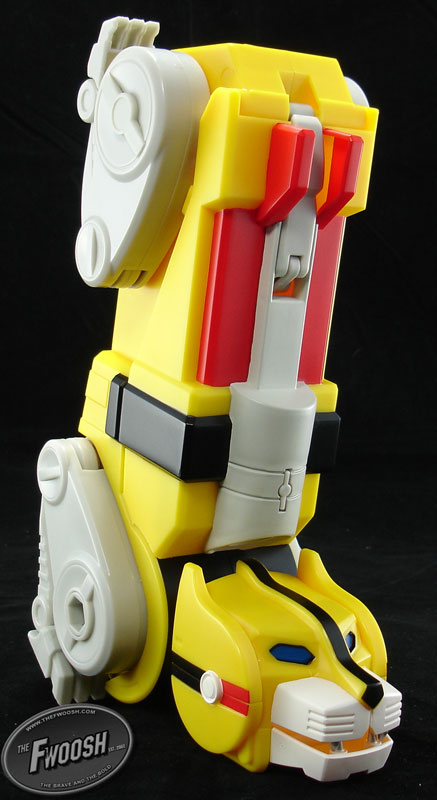 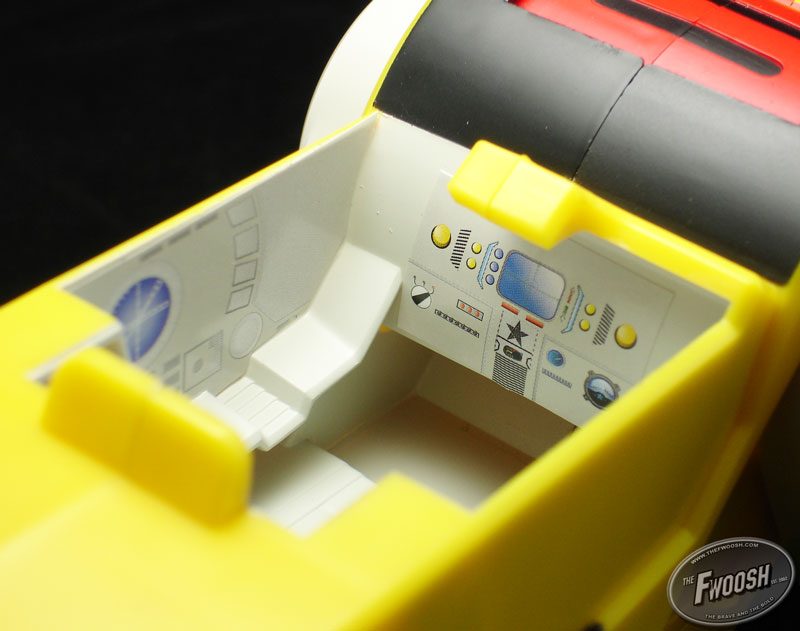 The same comparisons between the Red and Yellow Lions can be loosely applied to Lance and Hunk. Hunk has the same articulation scheme, plastic quality and so forth as Lance, he is just, well, bigger. But that is his thing so he is cool with that. His physique is appropriate to the character and while he is built on the same scheme as Lance, I don’t think they actually share many (if any) parts between them. I am fine with reuse where it is appropriate, but that would not be the case here so I am glad we got what was due for the character. It will be cool to get Pidge in a couple of months to have some real diversity amongst the group. Like Lance, Hunk has a helmeted and non-helmeted head that can be easily swapped out. I think when all is said and done I will have Voltron assembled with all of the pilots sans their helmets standing in front of him for my display. So I am likely to make the hairdo head my standard, I think it has more personality anyway. His key stand is yellow to match the Lion and he also includes his piece of the “build-a-sword”, the hand guard of the hilt. I know I have said it before that the smaller 3¾ inch scale is not my favorite, but I am glad they went in this direction for the pilots. 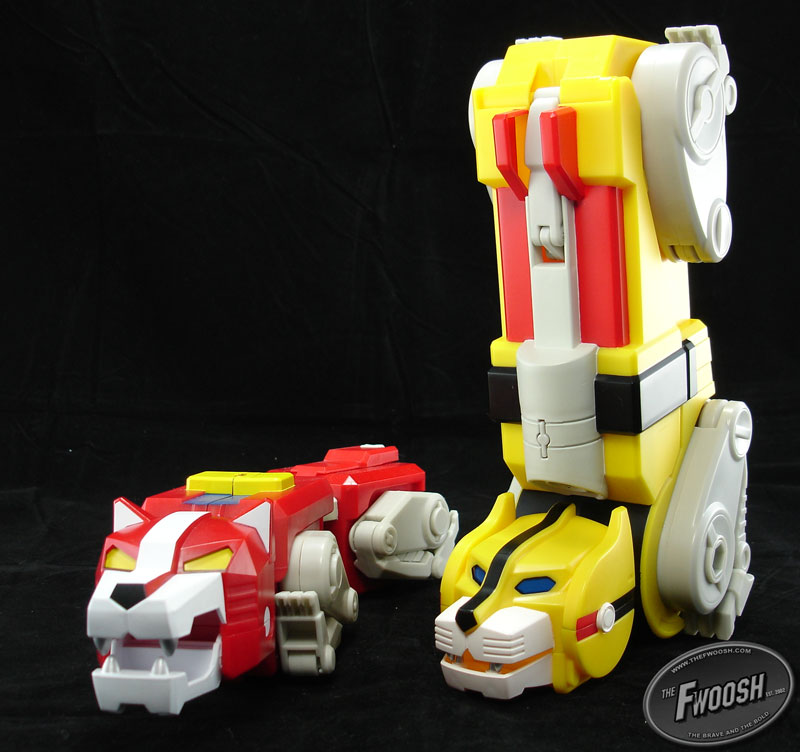 I know, it is really hard to wait for the end of the year to be able to complete our big Voltron figures. However, I think the Lions are a lot of fun and I am becoming fonder of the pilot figures with this release. I see them assembling as well and it will be really neat to have them all together. I can certainly say that I like the Yellow Lion and Hunk even more than Lance and the Red, but I think the color of the Blue and Green Lions will even outdo these two releases. Like I said, the Yellow Lion is pretty massive so I can’t wait to see how the final Black Lion turns out, then we can finally completely form our Blazing Sword! *Thanks for reading and thanks to Natalie and Voltron gang for sending along this sample for a First Look. Now that we have the April-shipping toys under our belt, onward to May and beyond! More soon!