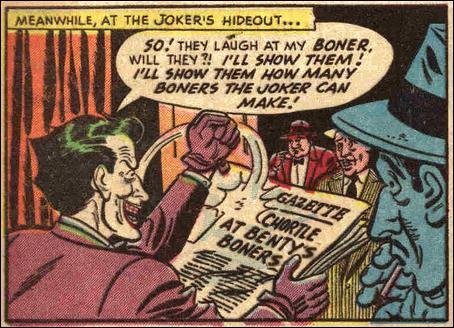 A lot of times we’re just too polite to point them out, or we pretend not to notice. Well, this column is not polite. It’s rude, crass and completely lacking in any pretense toward civility. It is a column that will point out those Boners and shine a discriminating light on them, illuminating Boners for the world to see. Read on and find out just how hard I can be on Boners.

In the walls of this column you will find me wagging my finger at the Boners that have been perpetrated on us, the collecting/hobbyist/enthusiast community. Some Boners are more obvious, some are hidden, but all boners will be revealed over time.

Let’s start out this first column with some easy Boners, to warm up the concept a bit:

This is a boner I don’t want to see again. The painted-over sculpted detail. Did you think we wouldn’t notice, Hasbro? Did you think nobody would see that you painted over a sculpted belt? What’s next, flesh-tone pouches on a bare leg? Maybe coloring a hat the same color as hair, hoping we won’t notice. No. This is not the way, Hasbro. You have proven you are better than this, so trying to fool us by painting over a belt where a belt should not be is a gigantic boner that slaps the fans in the face. And I for one do not want to be hit in the face with a boner.

I get this running change thing. I get it. Low cost, serving up a new character. But see…characters have gimmicks. Thor has his hammer, Captain America has his shield, Punisher has his guns, Doctor Octopus has his tentacles…and Piledriver has his fists. That’s that thing he does. He hits people. He’s a puncher. Much like the gamma-irradiated characters, people whose entire gimmick is punching need fists. Not grippy hands, but fists. I can excuse the gloves. I can. But the lack of fists, an integral component of the figure? No. That is a limpfisted Boner of the first order, and goes against the nature of the character. The prime directive of toy companies should always be: service the character. And this Boner serviced nobody. Bad Hasbro!

Just so this doesn’t become entirely Hasbashing session, Mattel’s the focus of the next boner.

The Flash will be late. Jay Garrick, the golden Age Flash, is going to be a month late. In an already troubled DC world with shifting schedules and thermometers and wilting enthusiasm, the last thing the collector community needs is the tremendous Boner of a delayed Flash. Above all else, the DC collecting community needs to be stimulated. And pushing the release of the first figure in the DC sub back a month is as unstimulating as thinking of Bikini Jay Garrick variant. A delayed Boner can kill enthusiasm quicker than…well, quicker than the Flash.

Ok, Bandai, now it’s just getting ridiculous. First off there was the 8 Inch Boner, releasing only two figures in that larger scale, and then giving that up and going back to the 6 inch scale where it should have been in the first place. But now with the cancellation of the cartoon and no sign of a continuation of the line on the horizon, there’s worry that at no scale will we be getting a complete Thundercats lineup—not even the core members. I can’t play with a Boner of this magnitude. Remember all the goodwill accumulated by NECA when they put out some great TMNT figures and then just stopped? Yeah, me neither. This Boner will put that Boner to shame, because at least we got all four Turtles out of that. But this…this is an incomplete Boner, the worst kind. I can’t stands no mo. Make the rest of them. Just do it.

Yes, it’s Hasbro again. It can’t be helped. But you know who the people like? Ninjas. You know who the people want to buy? Ninjas. You know who’s impossible to find? What looks to be the greatest Storm Shadow figure ever made. But this is a shortpacked Boner, and it has to be held up and scrutinized. We all want Storm Shadows, Hasbro. We each deserve out shot at him. We don’t like wandering the toy aisle and instead of getting the toy we want, getting nothing but a huge Boner slapped in our face. Remove this Boner, Hasbro, and stock our stores with Storm Shadows. Because buying toys is the other half of the damned battle.

The final Boner of today’s column goes to toy prices. Toy companies: I know, suggested retail price. Fine. But 20 bucks for a fifteen dollar toy? By my shrewd calculations, that is a five dollar Boner, and a ridiculous one at that. Prices are high enough. Toys are hard to find as it is. I’m ok with prices not being the same as they were ten or five or even three years ago. But to raise the prices enough so that when we do find them we end up having to spend obscene amounts of money for something that don’t even have to be that expensive, but are because you want a couple more bucks? All the money in the world won’t be enough to wash the stink of that Boner off of you. I go to Wal-mart, not Boner-mart. I go to Toy’s R us, not Boners are us. If I haven’t made it clear, I’m paying for toys, not Boners. Knock it off. Lower the prices back to reasonable, and stop being little bitches about it.