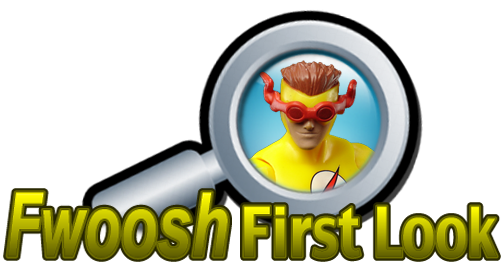 Young Justice is the theme for the next couple of days! The hit show is chugging along on Cartoon Network with great new episodes and Mattel is in full support mode with both six and four inch product lines. We want to make sure you have all the coverage you need on the latest offerings and we are going to start big and then go smaller. Up first are the brand-spankin-new Kid Flash and Batman figures that join their super-articulated brethren. One of the great parts of the show is that instead of shying away from having the “adults” appear in the stories, they are actually embraced for their mentor status. Past that, it is just good marketing to ensure that Batman does show up from time to time right? Well, he and Kid Flash are ready for your shelves, and they have brought more awesome (and giant) bases with them. 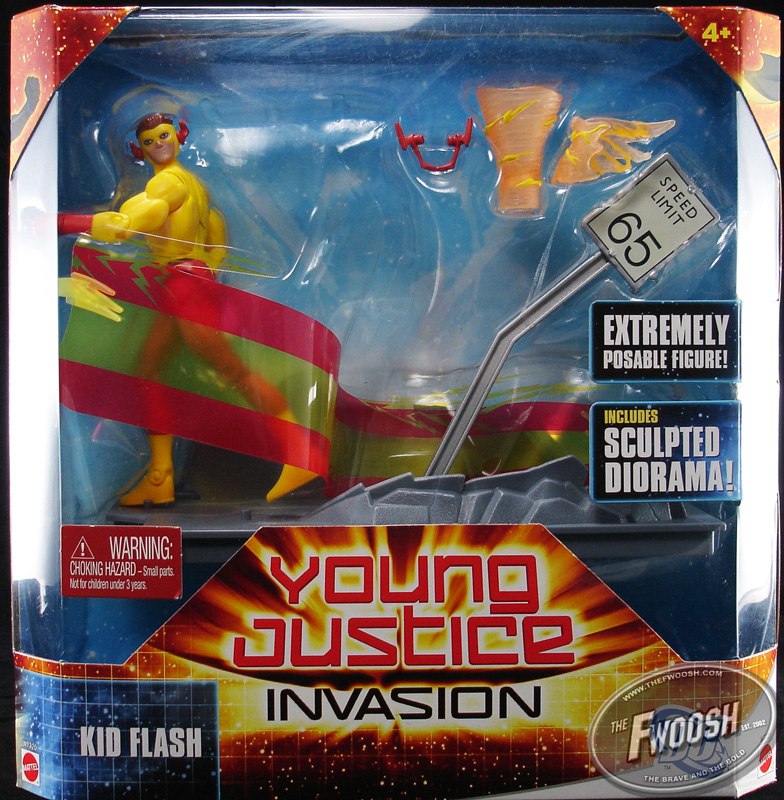 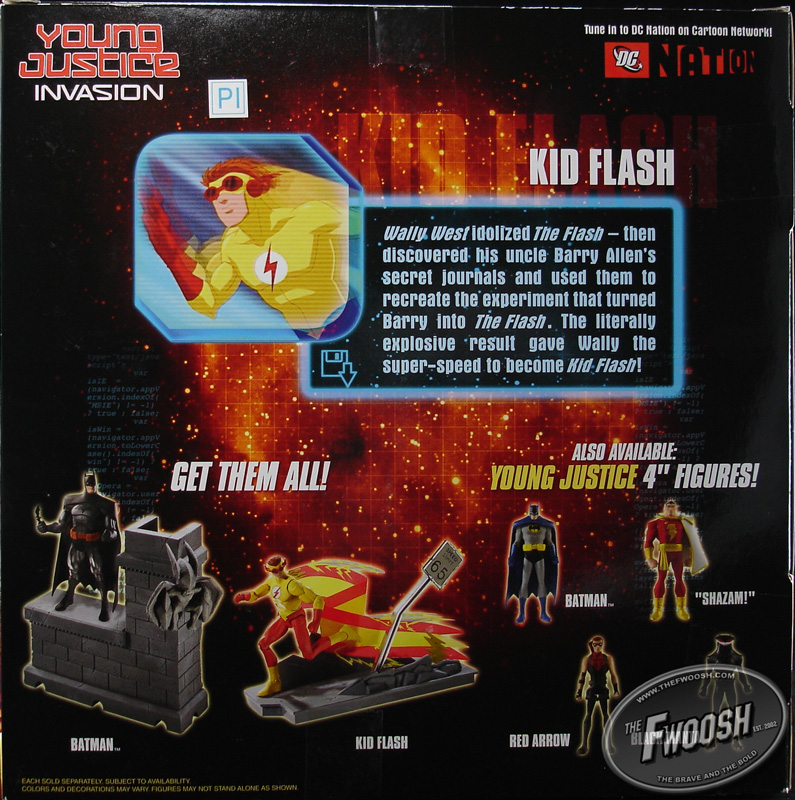 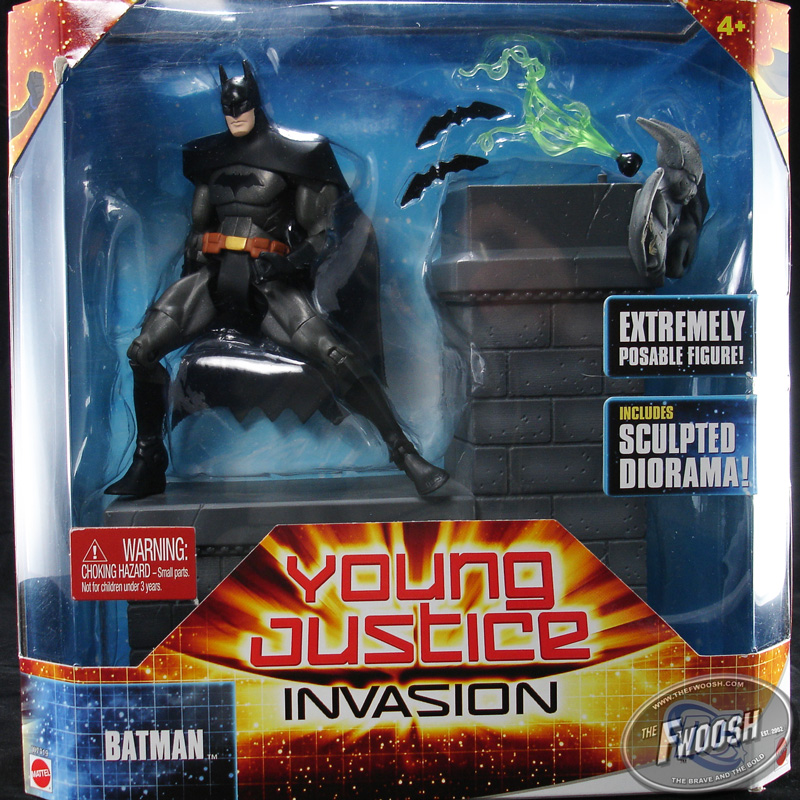 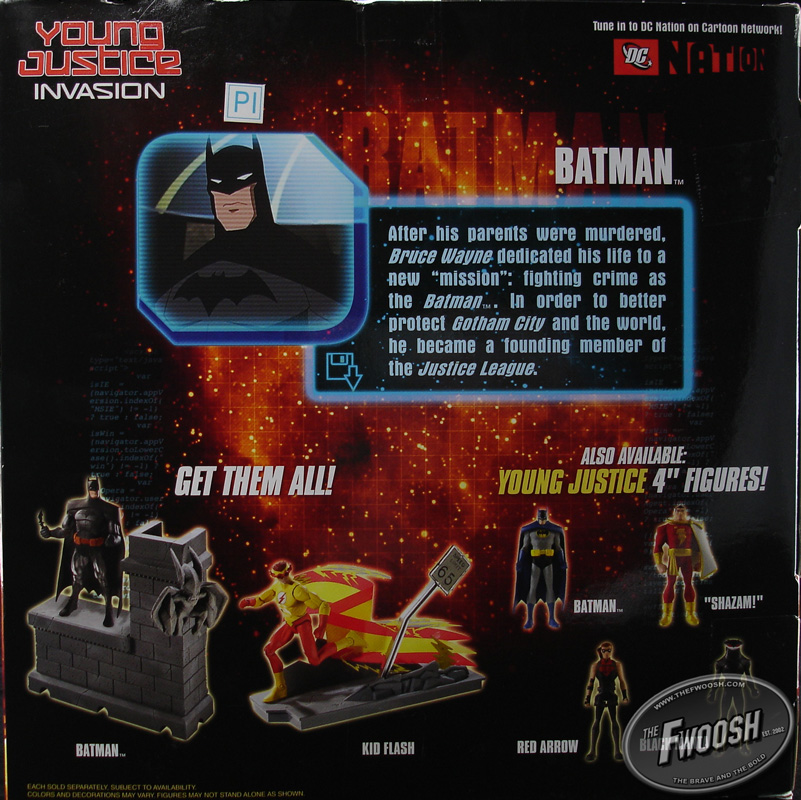 This line has not being going for very long but you can already see that we are building up quite the nice new YJ universe. It really works out well for six and four inch scale collectors since JLU is making its last-last-LAST swan song, and the six-inch comic line is still be repurposed for retail and its former self exists solely online. But do not despair! Right now we are getting some characters and incarnations that we have never seen in plastic, and they can even spend some time amongst your other collections if you like. I mean, how do you not introduce Sportsmaster into every iteration of the DCU you can? 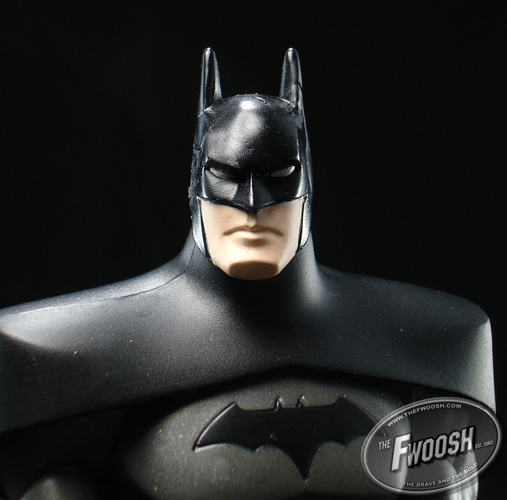 Robin’s mentor is no stranger to plastic, but how many of us can really resist another Batman figure? This one offers all of the good things from the DCUC line, like articulation and scale but also brings the styling of the show into the sculpt and a pretty slick, almost silver deco. Now, on a comic-based figure, unless he was wearing some kind of armor, this might be jarring, but for the cartoon version, it really makes him pop. There are some subtle new details in the costume and the boots but they are not so overpowering that he can’t be cheated into other displays. I know that most of the figures in this line have the “animated” touch to their look, especially in their head sculpts, but since Batman has the whole cowl thing, it is very minimized. For those that have been looking for a more slender and sleek Bruce Wayne, you might have a find on your hands. 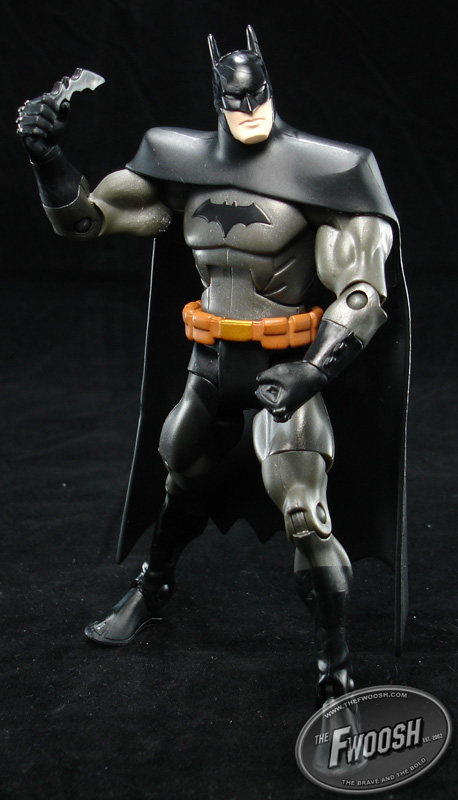 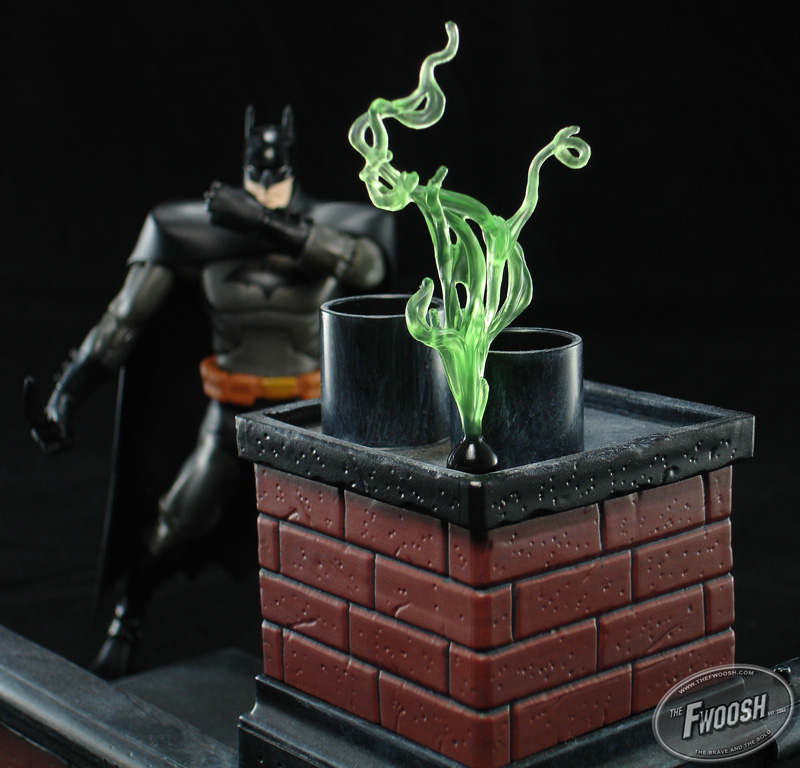 As much as I enjoy a lot of the figures in this line, at every turn the accessories and bases are just as good, if not better. You get two Batarangs (same sculpt) as well as a nifty Bat smoke bomb (I am sure there is a more clever name for this, but it escapes me at the moment). It is portrayed mid-vapor and the green mist is cast in a clear green plastic. I find it very effective and it has the potential to bring a lot of fun set-ups into your display. 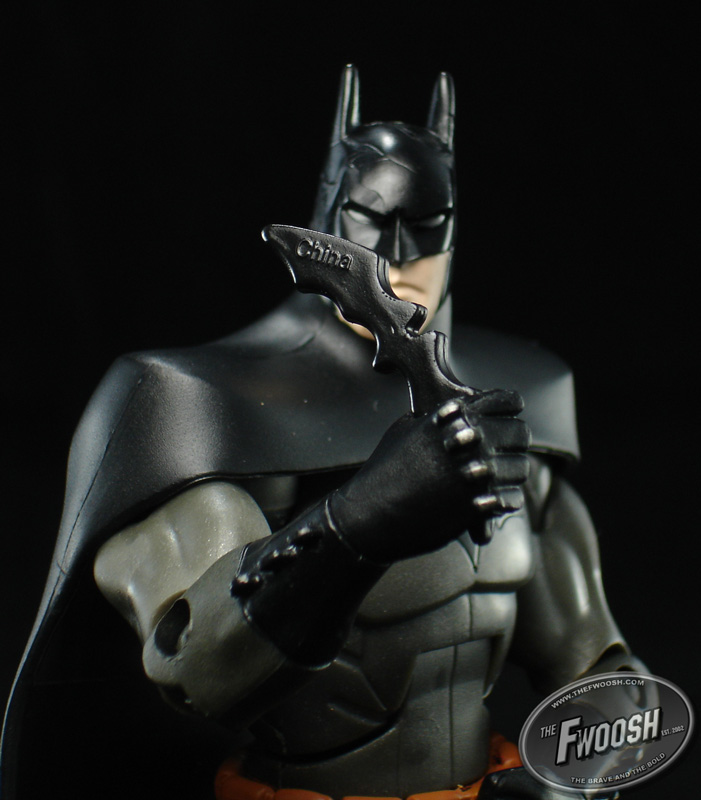 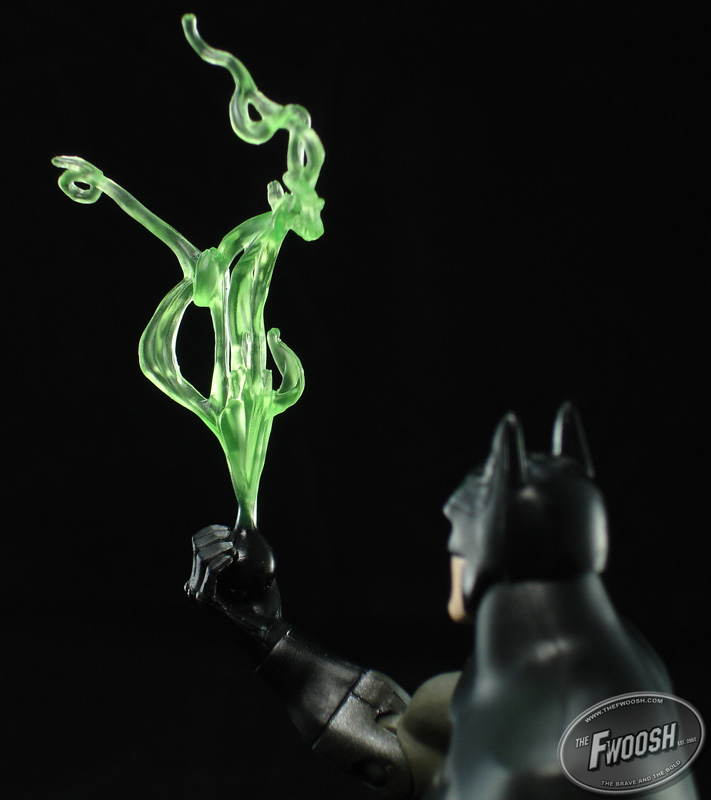 The base itself is really killer though. If you have Robin and Red Arrow/Speedy from this line, you already have a couple of good chunks of roofing that work well together. I really like this one because it is taller and can be set behind the other two to really provide some depth. There are foot pegs on the upper and lower level so Batman is set to brood wherever you like. I am normally a very straight forward “vanilla” poser for my own displays, but these are really making me rethink some potential display options. 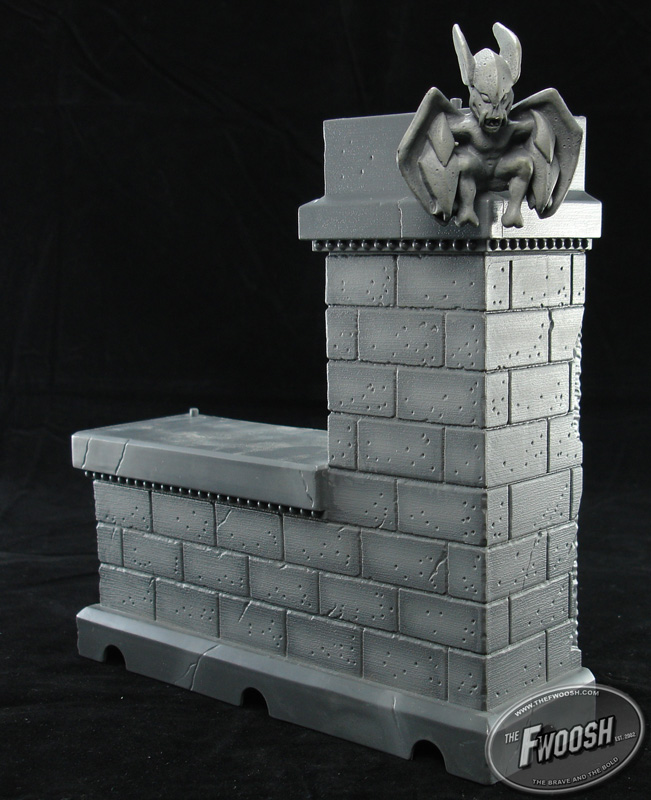 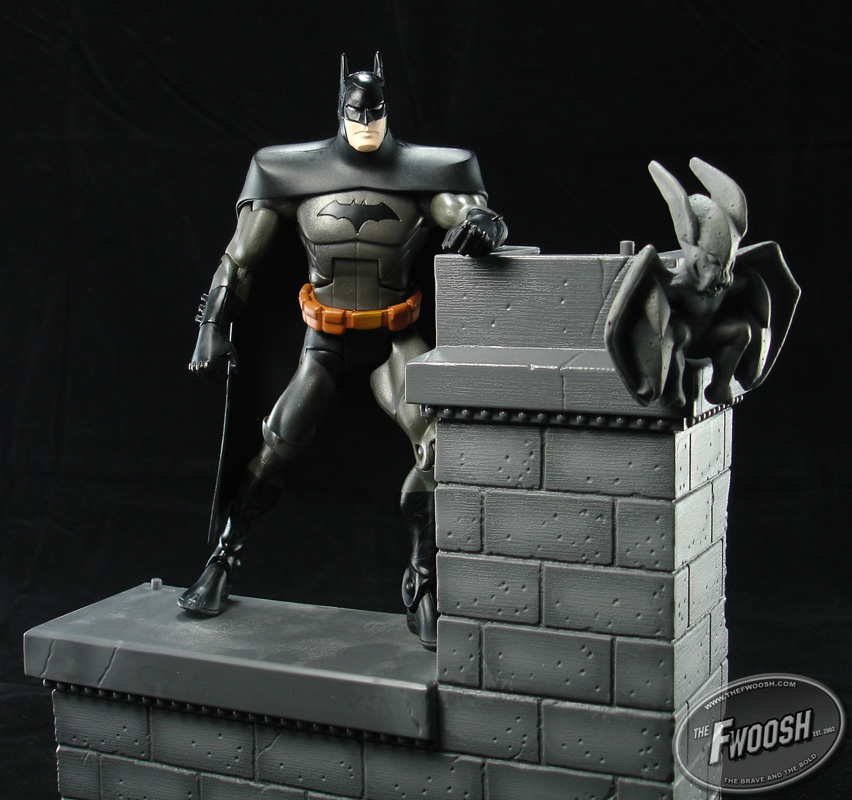 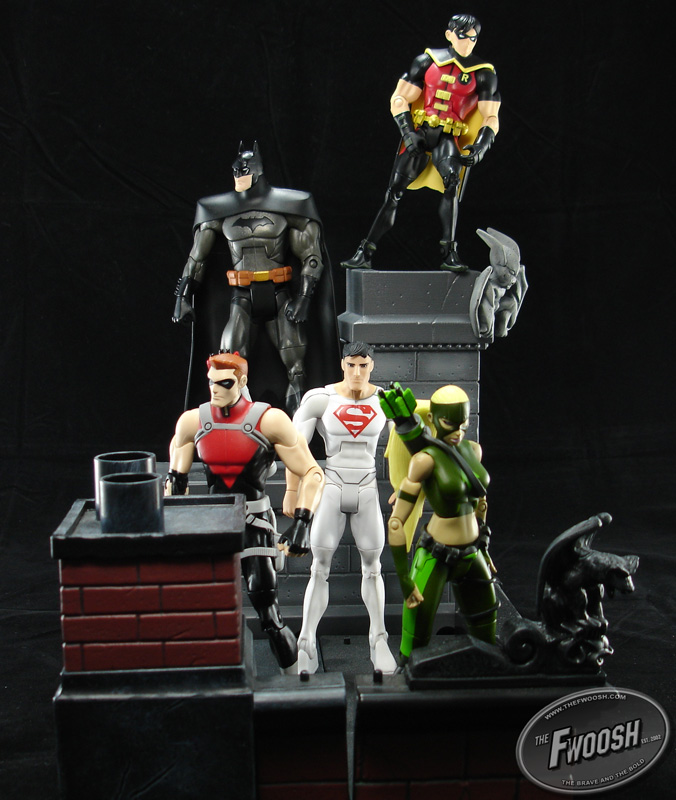 According to the forums, people are already starting to nab this figure, so be on the lookout now. 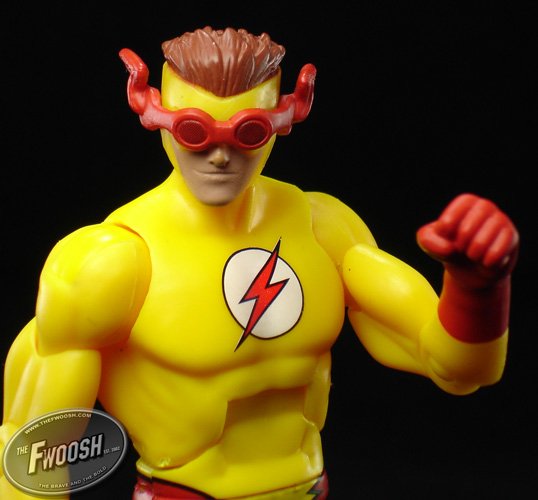 We could not get a mentor without getting one of the anchors of the actual Young Justice team now could we? I think that, like many of the characters in the show, Kid Flash is handled quite well in terms of characterization. The team has gone through some pretty heavy stuff so far, but while I have never been a huge Kid Flash (or any of the Titans/Young Justice) guy, I am really enjoying just about everyone on the show. I REALLY hope we can get a six-inch Captain Marvel out of the deal at some point too. Kid Flash joins his plastic counterparts of Robin, Aqualad, Artemis and Red Arrow, but I know a lot of people have been waiting with baited breath to see how the final figure, and maybe more so, the base turned out in production. 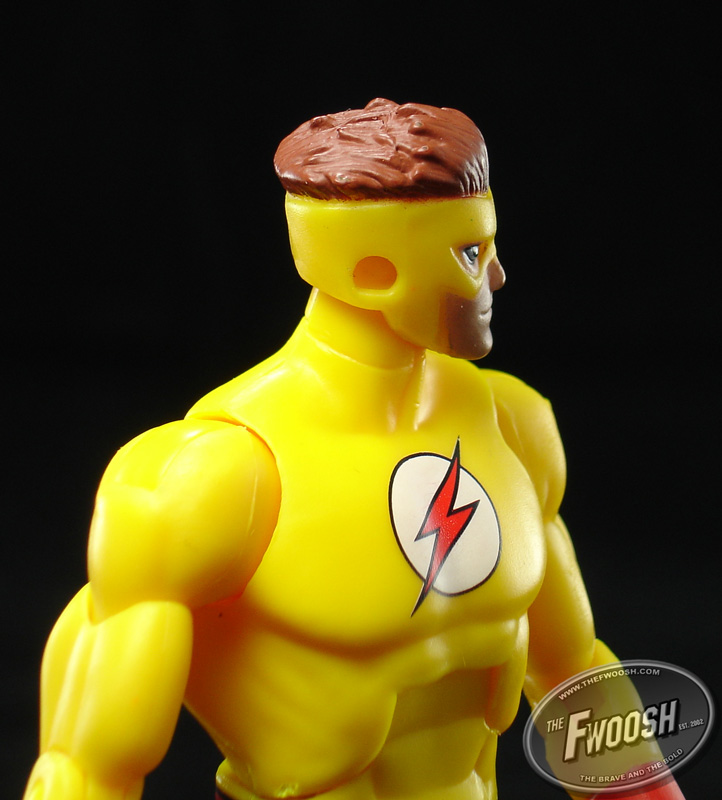 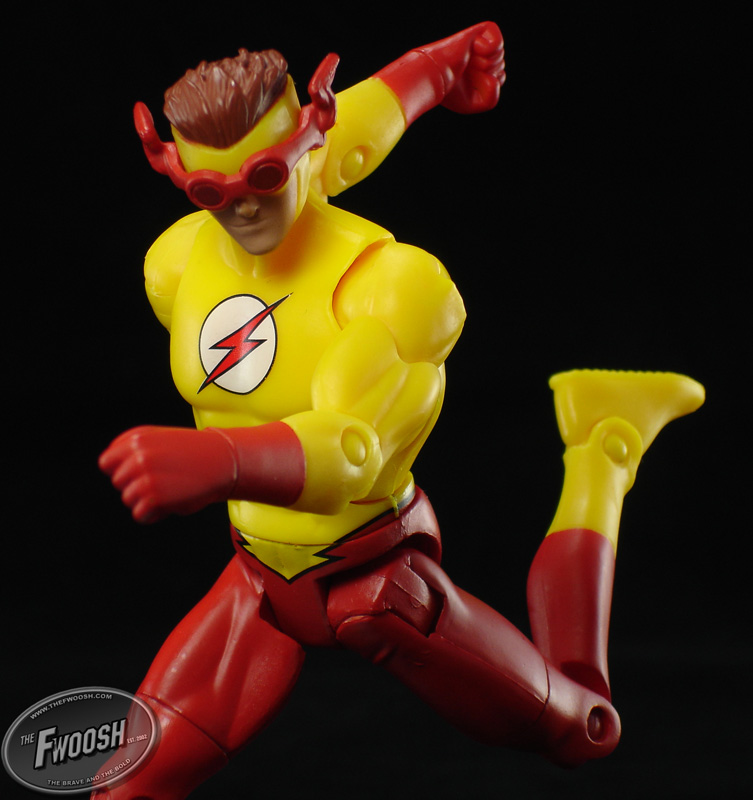 I have to admit, and I was not sure if I would feel this way at this point, but I think I might actually like this Kid Flash a little better than the DCUC 7 version of the character. I know, I am usually as straight forward comic guy, but while this figure is not THAT different from the previous, something about it just stands out a little more. He is mostly smooth in terms of sculpt detail, but he has all of the necessary added details (unless I am missing something). Maybe it is not the sculpt that puts him over the top for me, perhaps it is the accessories… 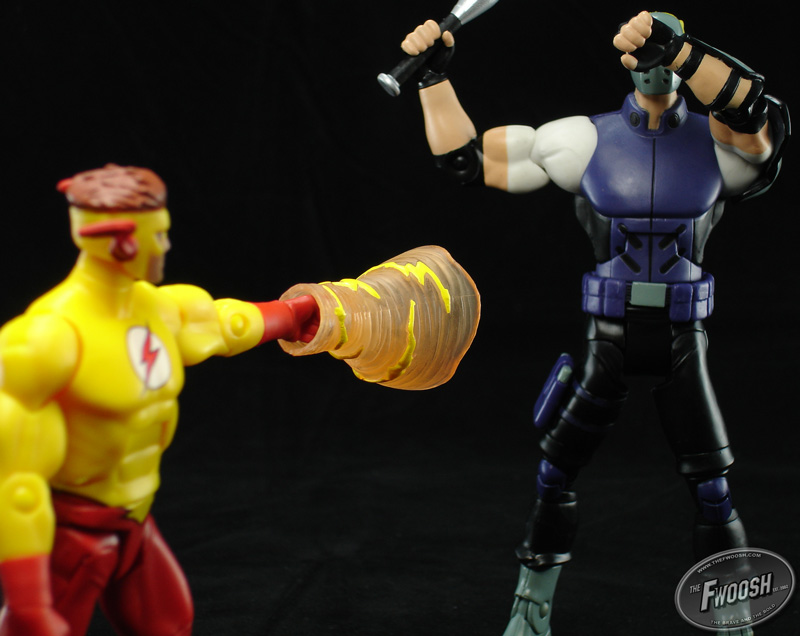 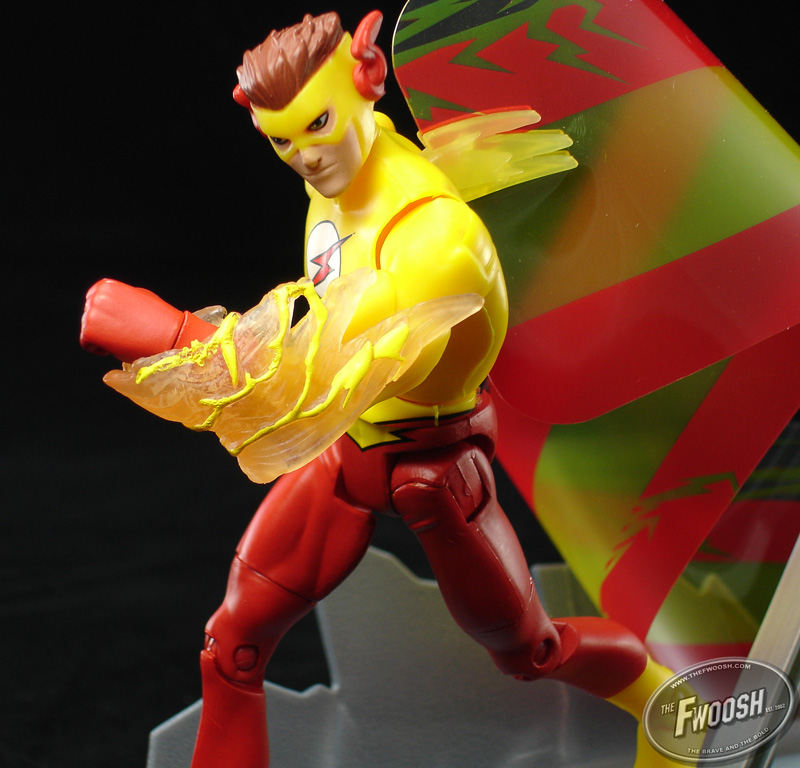 Right away you will notice that he has interchangeable goggles. At first I was pretty sure they would somehow just snap over this little temple bolts, but the latter are actually removable so the goggle can plug right into the holes. I will be displaying him with the goggles because I think he looks much more dynamic with them, but I am always welcoming of options. He also has two little snap-on accessories – a whirlwind effect and a “speed bolt”. These are both made of a very rubbery plastic so they will go on and off easily. The whirlwind will work for battle poses and it can be shared with other six-inch figures you might have like Red Tornado. The speed bolt is nice and subtle and accents a good running pose, which is perfect if you choose to display him on his base. Speaking of… Unlike a lot of the bases that come with figures in this line that are designed to be static, this one harkens more toward Aqualad’s in its action-oriented design. Kid Flash will be running right down the street taking speed limit signs to task (and destruction) as he races by. Adding more to the “caught in the moment” essence of the piece is that there is a very thin, very flexible “speed streak” that you can attach to his back and to the ground also included. I was very curious to see how this would be realized when I saw it at SDCC last year and I think that it is very successful in its translation.

Kid Flash should be racing to shelves now, but be fast as I think he will be hard to catch. It looks like the YJ show and figure lines are here to stay. We are quickly building the universe up in two scales and I am looking forward to see who will be offered next. I needs me some more rooftops!

*Thanks to Fangirl 2.0, Toy Guru and the crew for sending these guys on for a First Look. More YJ coming soon!