He collects spores, molds and fungus and while he might tell you that a written review of his action figure is not needed as print is dead, Dr. Egon Spengler cannot deny that collectors have been waiting for TWENTY-FIVE years for action figures based off of one of the greatest movie properties ever – The Ghostbusters! We have a final surprise Pre-SDCC First Look at the debut figure from this highly anticipated line courtesy of Toy Guru so sit back and remember, Dr. Spengler only had part of a Slinky growing up, and he straightened it, we are so spoiled by today’s toy standards. Without further ado… Do…Re…

As I am sure you know by now, this SDCC Exclusive Egon comes in a “slimed” deco and, appropriately, he comes packaged with Slimer. Now don’t worry, there will be a regular Egon coming later in the line, but not for a little while. So, how does he stack up?

A lot has been said about the packaging since it debuted on Matty’s Facebook page about a month ago. Some have liked it, others not so much, but ain’t that the way it goes? Personally, I think it works. The Stay Puft effect works well and I like the shape of the bubble with the half pictures of the Terror Dogs, it is very Gothic in nature- Ivo Shandor would be proud. Another nice thing is that while the bubble is taped, it can snap right back on so MOCers can take him out of the package! The figure itself is actually very well designed and sculpted (again, we are talking about the Four Horsemen here) and they have captured Harold Ramis’ likeness quite well while keeping a certain style to figure. People have speculated that the glasses looked a little more like goggles in the first packaged pictures, but it looks like that might have been premature. The body sculpt is nice and it looks like they will be able to use it for the rest of the ‘Busters as well. He clocks in at about 28 points of articulation. A lot of it borrows from the standard DC Universe Classics POA make-up with some different points at critical places. First, the Ghostbusters symbol is located on the upper arm, so a biceps swivel would break it up and that just would not do. So instead, Egon features ball elbows, an articulation point I am not so fond of as it tends to really break up a sculpt. However here it is hidden by the elbow pad and it gives great range to the forearm- he can hold his Proton Pack perfectly in the ready position. To get a more offensive pose you need to pose him more to the side, which is fine as that is the usual stance. POA includes: ball neck, partial ball shoulders, ball elbows, wrist twists, wrist hinge, swivel waist, DCUC hip hinges, thigh cuts, single knees, boot cuts, ankle hinge and ankle side-to-side. His paint is also very nice, particularly on the head and Proton Pack. Toward that end, he does have the “slimed” effect. Depending on you preferences, it really is not that noticeable from afar and I think with some acetone and a little care you can get the slime right off. He will hold well on the shelf with the un-slimed counterparts and look just a little battle worn. For scale, as you can see below, he is most certainly a six inch figure and he fits more in line with the Movie Masters line and is a little small to fit in with a line like DCUC. I suppose some will find joy and sadness in this on how they feel the Ghostbusters will fit in with other lines, but I am taking it as stand alone and expected him to be more along the lines of MM. However, I must say he fits in great with most of the NECA figures that were produced a few years ago- that is taken a bonus for me. Terror Dogs and Mr. Stay Puft will blend seemlessly. Egon, like all of the upcoming GB figures comes with a pack-in ghost and, of course, the most famous of GB ghosts leads the charge- Slimer! He is cast in a translucent green plastic for a bit of a “phasing” effect (I am not sure if he will be released later on in a regular deco) that works well. He comes with a stand (much like the Doomseeker stand included with the previously review Tri-Klops figure). He features ball shoulders, elbow hinges and twist wrists. I am really looking forward to the release opportunities for the pack in ghosts. If I remember correctly October’s Ray figure will include the Ghostbusters “logo” ghost. His other accessory is his Proton Pack and man, it looks 100% perfect in movie accuracy to me. It has all of the little details included and the paint makes it look slightly beat up, just like in the films. It is probably the best feature of the figure, even if it is not removable. Remember though, the Proton Pack is not a toy! Sorry. Overall, I think Mattel has a winner on their hands. It is cool to review SDCC figures, but Egon is also the kick off figure for this new line and if you are a fan of the ‘busters at all, you should really pick him up at SDCC or a www.mattycollector.com on August 3rd. I am really excited about what will be shown for this line at the Mattypalooza panel on Friday. I hope they have a lot of fun stuff planned, but right now, I would even settle for confirmation of a Venkman figure.

*So, enjoy the pics and again, thanks to Toy Guru and Matty for getting Egon to us at light speed, they wanted to get  you a look before the big show starts on Wednesday. Would you like some more pictures? Yes, have some. 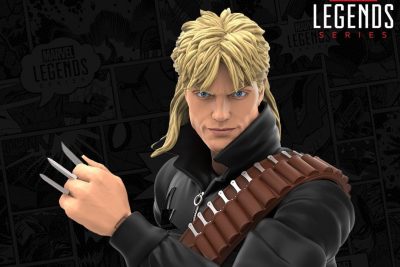 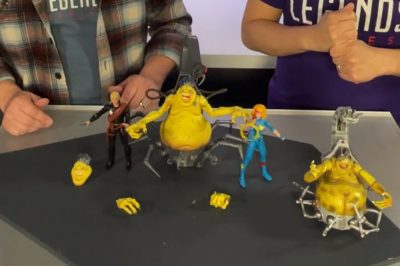